Udaltsov Uses Twitter Plus Courage to Speak out in Russia 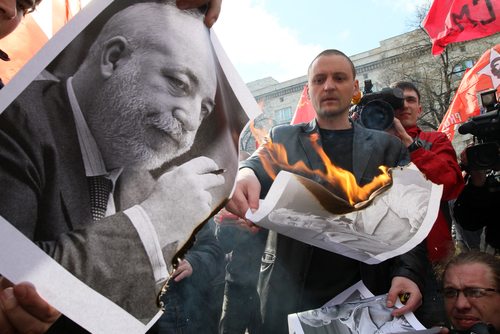 Those of us who think of the nonprofit sector as an engine promoting free speech, advocacy, and social progress are always impressed with the demonstrations of personal courage that some third sector leaders in other countries display regularly. We’ve written about Aung San Suu Kyi, who endured years of house arrest, and about the tragic attempted assassination of 14-year-old education activist Malala Yousafzai in, both of whom represent the qualities we most admire about people who stand up for truth against repressive powers like the Burmese military generals or the Pakistani Taliban.

We would add Sergei Udaltsov to that list. Having been repeatedly arrested in recent years for his efforts to protest Russian President Vladimir Putin’s increasingly authoritarian policies, Udaltsov knows the inside of Russian jail cells. The leader of the Left Front movement, Udaltsov was arrested this past April outside of the Duma (Russia’s parliament) headquarters in Moscow as he tried to join a group of demonstrators gearing up to protest a speech by Putin. He has also been arrested for crossing the street (to join demonstrators) in the wrong place. Just this past week, he was again pulled in by the authorities on the charge of “organizing mass disorder.”

As part of a social movement, Udaltsov’s continuing commitment impresses us, but what makes his courage of particular note to NPQ Newswire readers is how he handled his most recent arrest earlier this week—by live-tweeting what was happening to him at the hands of the State Investigative Agency (Russia’s FBI, which goes by the initials of SK). From 11 p.m. on one day until 1 p.m. the next, Udaltsov tweeted about the SK’s raid on his apartment, the seizing of his computer and documents, the SK’s questioning of him, and his ultimate release.

Amidst the all-too-frequent tweets we see that look like “notice me” self-promotion, Udaltsov’s tweets and retweets reflect one of the really important uses of social media: its capacity to act as a real-time tool for documenting and exposing the efforts of authorities to squelch dissent and protest. The brief excerpts of Udaltsov’s tweets are, as real-time reporting, unembellished, gripping reading—particularly the messages he sent as the SK debated whether and how to arrest him. We were particularly impressed by Udaltsov’s sense of presence throughout the ordeal, tweeting midstream, “Don’t be silent. The most important thing is for you to not be silent!” He then ended this chapter in his story with, “Friends! My release from the SK is under the signed statement of my not leaving. In many ways, this is because of you. Thank you for the support!”

Atlantic staff writer Megan Garber links Udaltsov’s live tweeting with other examples of people using the medium “to turn a dark practice inside-out.” Garber advises, “And if you’re expecting to be arrested …you can do things like sharing your social media account information with trusted compatriots to ensure that others can speak on your behalf…You can use simple technologies to ensure that, even when you’re arrested, you’re not silenced.” To follow Udaltsov’s example, however, you need more than Twitter. You need the courage and integrity to stand up against powerful repressive forces and to remember your place in the third sector’s tradition of promoting social change through advocacy, mobilization, organizing, and protest. Udaltsov, мы восхищаемся Вами (we admire you).—Rick Cohen