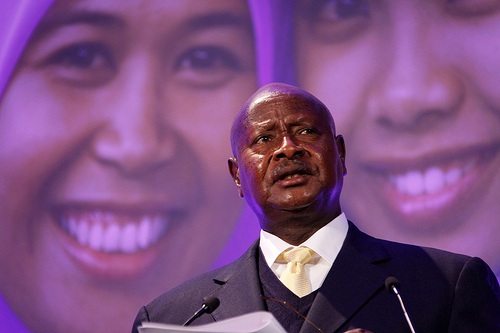 Our occasional coverage of Invisible Children’s efforts to get warlord Joseph Kony out of Uganda (where he and his Lord’s Resistance Army haven’t played a noteworthy role in a long time, as they appear to be on the run largely in the Sudan or South Sudan) and in front of the International Criminal Court in the Hague has meant that we have occasionally taken note of Uganda’s government under Yoweri Museveni, president of the nation since 1986.

There was some well-publicized controversy concerning Uganda’s repeatedly introduced legislation that would make homosexuality, already prohibited in the nation, a crime that, if deemed to be “aggravated homosexuality,” whatever that might be, would be punishable by death. Invisible Children, which has some Christian fundamentalist funding relationships, took pains after criticism to dissociate itself from the law, and President Museveni, while declaring himself opposed to “promoting” homosexuality, came out against the death penalty as a possible punishment. Nonetheless, beyond the Kony campaign and the homosexuality legislation (introduced by a member of the Ugandan parliament, not initiated by the Museveni government, as regime spokespeople repeatedly note), what do we know about Uganda and charity, especially since a significant portion of the fundraising by Invisible Children is targeted, according to them, to charitable activities in Uganda, particularly geared to the many orphans and refugee that Kony created in the heyday of his murderous tour?

News regarding an unusual form of charitable giving in Uganda this past week was troubling. There were widely circulated reports in the international press that eventually made it stateside about President Museveni handing a huge sack of cash reportedly containing 250 thousand Ugandan shillings (a bit less than $100,000 USD) to a young man representing Busoga Youth Forum, a youth organization from eastern Uganda. The information about the money is actually unclear. Museveni’s spokesperson, Frank Tumwebaze, said that the cash gift was, in the words of the Associated Press, “budgeted for,” but he said that the money actually comes from “entertainment per diems that Museveni doesn’t claim for himself.”

Critics such as Jackie Asiimwe-Mwesige, whom the Associated Press describes as an anti-corruption activist, asked, “Which president walks around with kilograms of money? It looks so pedestrian. It doesn’t augur well for his stature.” Others, such as researcher Peter Magelah from the Acode think tank, questioned the potential lack of accountability of the donation, but Tumwebaze defended it, pointing out that the donation was made in public, fully visible, so that the Ugandan citizenry would know who received it, as opposed to doing it in secret or simply having President Museveni walk off with the money.

The Museveni donation—the sack full of cash, plus a minibus, a truck, and 15 motorcycles—has struck a nerve. The President apparently likes making these cash donations, as Linda Nabusayi Wombuka, a presidential aide, wrote in The Observer, noting his gifts of cash to other groups, such as 150,000 shillings handed over in a briefcase to the Uganda Journalists Association. But this show has sparked an active Twitter discussion with the hashtag #SackofMoney, with assertions that this is political money, and that the President is buying political support from this youth group. (Though eligible to remain in office for 30 years after having eliminated constitutional term limits, Museveni says that he does not plan to stand for reelection when his term is up in 2016. But, if he doesn’t run, certainly his allies and a handpicked successor will.)

What President makes cash donations to youth groups with the expectation of political gain? Perhaps it is a distinctly Ugandan practice, as Uganda is the world’s “youngest” nation, with over 57 percent of the population under the age of 18. Given Museveni’s predilection for big, showy cash gifts, how do international regrantmaking charities such as Invisible Children navigate this unusual and clearly questionable practice?—Rick Cohen