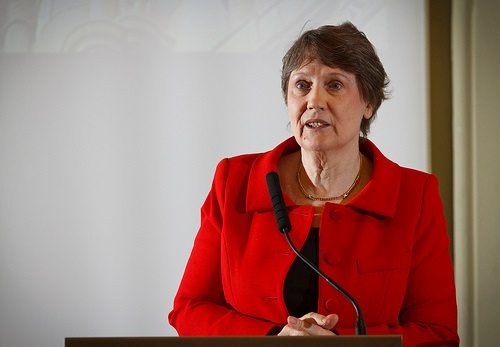 Imagine having a conversation with Helen Clark, the head of the UNDP (United Nations Development Programme) from the comfort of your own home. Not only is it possible, it happened on Tuesday, January 14th. Beth Kanter’s blog shared the details about the eight-hour online conversation, which used Twitter and Google Hangouts to allow average people to ask questions of global leaders about the upcoming meeting.

It turns out that Helen Clark is a leading convert to the power of Twitter. The goal of the Twitter chat was to “raise awareness, drive action and share best practices about the global policy agenda.”

“We find Twitter tremendous for outreach, for spreading ideas, obviously for saying what our own work is as part of finding solutions to big development challenges. We’re encouraging all our country officers to get their Twitter accounts active—get the photos up, get the stories up. Development is about stories. It’s about stories of achievement, of progress, of people’s lives being better than they were. People really want to hear about this. They don’t want to hear about all the failures—they want to hear about what difference are you making,” said Helen Clark in a recent interview.

Beth’s Blog captured the Twitter chat in a transcript available here. To see the potential power of a Twitter chat, read the comments and you’ll never again say that Twitter is only for telling others what you had for lunch. There was serious dialogue about global issues, all within the confines of 140 characters. Tweeting with hashtag #post2015, Helen Clark dialogued about “the scourge of gender based violence.”

The Twitter event was organized by +SocialGood. Their goal is to “unite a global community of innovators to use power of technology and new media to make the world a better place.” They even developed a toolkit with sample Tweets, Facebook posts and more. It is a great example of tools and templates to have ready when your organization takes on its first Twitter chat or other social media campaign.

If the leaders of international economic development organizations are using social media channels to engage a new audience, isn’t it time to have a Twitter chat amongst your board members? Develop your tools and templates, inform your audience ahead of time, seed the questions, and practice using Twitter to engage your audience. As regular readers of Beth’s Blog know, it is important to try new ideas, learn from your experience, and then try again.—Jeanne Allen