United Nations Report Recommends that the US Decriminalize Being Poor 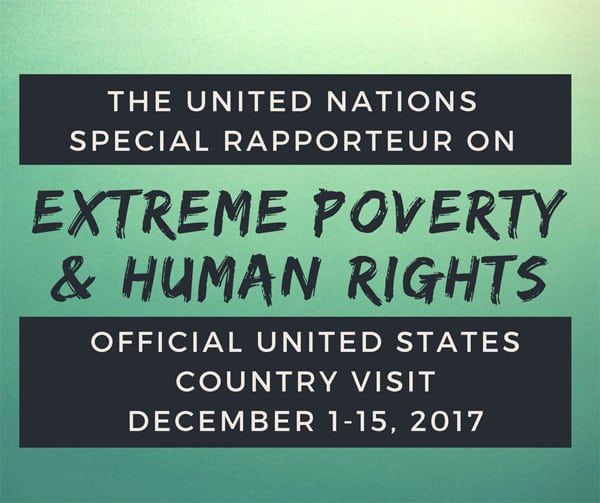 Philip Alston, United Nations Special Rapporteur on extreme poverty and human rights, will present his findings from his 12-day fact-finding tour on poverty in the US to the UN Human Rights Council in Geneva, Switzerland on June 21st. During his tour, Alston made stops in California, West Virginia, Alabama, and Puerto Rico. An early version of his findings was released in December and was covered in NPQ by both Jim Schaffer and Marty Levine, but his final report was only published a month ago.

Some of the findings of the report include the following:

In an interview with Jenny Jarvie for the Los Angeles Times, Alston gave an overview of his travels:

I started off in California, where the emphasis was on homelessness. I then flew over to Alabama, where the focus was on racial differences and the failure to provide even basic services, like sanitation, in areas that were very close to large cities…

I then went to Puerto Rico, which would definitely be the poorest state in the union if it were a state. The situation was very grim, even before Hurricane Maria, but obviously exacerbated greatly after it. I’m told I’m not supposed to use the term, but certainly, the conditions were very much Third World. I met people who were living without any real access to the basic services that we’ve come to expect. Government is just not an actor. There’s no provision of social protections at all…

I went to West Virginia, one of the states that did not take the Medicaid expansion, where they have relatively low rates of health insurance, and I saw the extent to which very few government services are provided for people generally—not just health, but access to the internet and so on.

In his report, Alston offers five policy recommendations. These are: 1) decriminalize being poor, 2) acknowledge the plight of the middle class, 3) acknowledge the damaging consequences of extreme inequality, 4) recognize a right to health care, and 5) get real about taxes (by which Alston means to encourage greater progressivity in the tax code).

Alston is under no illusion that his recommendations will be implemented quickly. “The United States is a proud nation. I don’t think that it will particularly appreciate being given such a poor report card before the international community. But I would very much like it if the US, when I present the report on June 21st to the Human Rights Council, would come out and try to defend its policies. I think that would be a very helpful step in getting serious debate going.”—Steve Dubb