For the first time since the Population Institute began issuing its annual State of Reproductive Health and Rights: A 50-State Report Card eight years ago, the United States has received an overall grade of “F.” For many, this will come as no surprise. States across the country have been enacting draconian restrictions on reproductive healthcare.

Indeed, sometimes there seems to be a race among states to see which one will get the US Supreme Court to overturn Roe v. Wade and free states to outright outlaw abortion. This report, issued by the Population Institute, grades each state on areas that should be of concern to everyone who cares about the health and wellbeing of women and children in this nation. And when the overall grade for the country moves from a D- to an F, one can hear the doomsday clock ticking.

The criteria used to “grade” each state focus on three areas: the affordability of reproductive health care services, the rates of teenage and unplanned pregnancies, and access to contraception and abortion care. According to the report, 2019 was not a good year for these criteria in many states, due to federal mandates that were implemented at the state level and then combined with state actions.

There were many federal setbacks in 2019, most notably, the finalization of a new set of rules for Title X, the 50-year old federal-state partnership that supports family planning clinics serving low-income households. Frequently referred to as the “domestic gag rule,” the new rules prohibit Title X family planning physicians and staff from counseling patients on abortion or referring them to abortion providers. In response to the new regulations, Planned Parenthood and other abortion providers dropped out of the program.

Not only were states left without or with fewer Title X providers, those providers that remained faced a new onslaught of TRAP (Targeted Regulations for Abortion Providers) laws coming from their state legislatures. According to the Guttmacher Institute, 2019 saw an unprecedented wave of abortion bans, with 25 new bans being signed into law in states mostly in the south and the Midwest. These are states that, to no one’s surprise, received consistently low grades from the Population Institute. But all was not bad news. The Guttmacher Institute also tracked policies enacted by states that would protect abortion rights. The chart below shows the gap between those 2019 policies that would restrict and protect abortion rights. 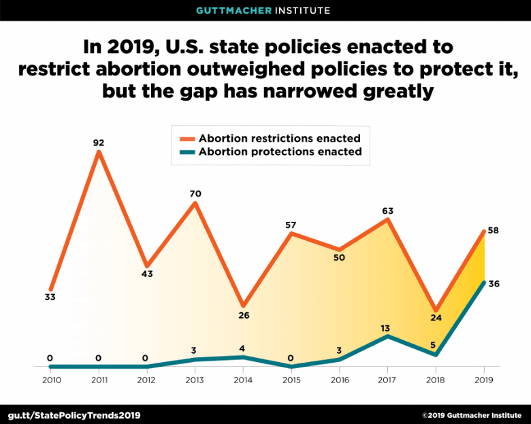 As we look, state-by-state, at how states are promoting reproductive health and rights and how they are promoting or restricting access to these important health services, there is a very deep divide between states in this nation. The report notes this clearly in its introduction:

The report explains in more detail how these criteria are further broken down and scored. This is not a simple test. But in the end, the results are clear. The roadmap for reproductive healthcare in this country is complex and depends greatly on where you live and what your means are. If you live in a rural area, in a state with a score of “D” or “F,” or are low-income or a person of color, this report is not good news. Your access to reproductive healthcare may be limited, to say the least. As Jennie Wetter, Population Institute’s director of public policy, says, “This report card is a call to action for all those who care about reproductive health and rights.”—Carole Levine