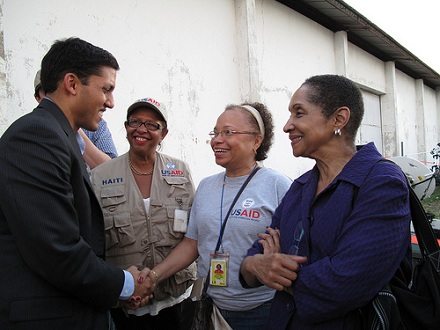 Rajiv Shah, the head of the U.S. Agency for International Development (USAID), gave an interview to Forbes and talked about topics that one doesn’t often hear addressed by government officials except in the blandest of platitudes—in this case, “the intersection of philanthropy and development,” “effective public-private partnerships,” “the role of social entrepreneurs and social innovators,” and “cross-sector collaboration.”

The Forbes interview followed USAID’s Frontiers in Development conference, which was oriented, according to USAID, toward “(e)ngaging with the smartest, most innovative and experienced thought-leaders and practitioners around the world [and] seizing pivotal opportunities to leave behind generational legacies of success.” Among the smartest and most experienced thought leaders speaking to this assemblage were United Nations Development Program administrator Helen Clark, former United Nations High Commissioner for Human Rights Mary Robinson (who was also Ireland’s first female president and is now running her own foundation on climate change), co-founder of Saddleback Church Kay Warren, and Rockefeller Foundation president Judith Rodin. Another well known philanthropist named Bill Gates also addressed the forum, and his foundation was listed as a “partner” for the three-day event at Georgetown University, along with the Rockefeller, Hewlett and MacArthur foundations.

Partnership was the key theme that pops up throughout the agenda and through blog postings drawn from a new USAID publication produced for the conference. Typical is Warren’s call for churches in the U.S. and in developing countries to partner with U.S. government agencies “to engage and equip ordinary people in local churches to actively address development issues in the lives of real people everywhere.”

Shah himself is something of the embodiment of the partnership he wants to see in U.S. development aid, having worked for the Bill & Melinda Gates Foundation for 10 years before taking the helm at USAID. As he told Rahim Kanani at Forbes, “We’ve seen a significant evolution in [the] global philanthropy movement in the past two decades.” His argument is that new philanthropists from the Silicon Valley, “(h)aving made their fortunes in highly competitive industries…[have] dedicated themselves to bringing the same level of rigor and analysis to philanthropic work.”

Shah describes his own experience in philanthropy as having given him “a deep respect for the importance of bottom-line results and social returns on investment.” Shah calls for the new ethic of philanthropy “to drive an approach to development which is centered on achieving measurable outcomes, cost-effectively.” Echoing a currently popular philanthropic trope, Shah says that “many of this generation’s philanthropists both understand risk, and understand that philanthropy is uniquely placed to be able to take big risks in a way that government entities and donor-dependent nonprofits often can’t… to reap big potential rewards in terms of development outcomes and innovations.”

Shah lauds a number of public-private partnerships USAID has helped craft, including those with Cargill, Kraft, Hershey, and Nestle to strengthen the cocoa sector in West Africa and with MTV on a social marketing campaign against human trafficking. Although part of an administration regularly excoriated by Republicans for being anti-business, Shah harbors no obvious misgivings about the corporate sector as part of USAID’s program: “We should embrace greater private sector engagement in development, and identify new ways to harness the skills, technologies and innovations that companies large and small can bring to bear.”

With foundations, he is high on the agency’s new Global Development Alliance, co-sponsored with the Skoll Foundation of eBay’s first president, Jeff Skoll. The alliance seeks “to identify high-impact entrepreneurs who have demonstrated innovations and sustainable business models that are ready to scale.” To Shah, this is part of USAID’s partnership with “the social enterprise eco-system.” Shah explains, “Social entrepreneurs often have similar social goals as donors, whether it’s decreasing poverty, or improving health or educational outcomes. But, they have a fundamentally different and innovative way for achieving those goals—one in which sustainability and scalability are inherent parts of the enterprise.”

Shah knows that international giving from U.S. foundations and overall charitable givers has been on the upswing for several years, showing, as we have seen in the Giving USA studies, an impressive double-digit rate of growth. To him, the increasing proportion of U.S. development assistance that flows through private sources is evidence of a beneficial societal partnership. Is it possible, however, that there might be a relationship between increased private aid, the rocky appropriations road USAID has been facing with Congress, the potential of future cuts coming down the pike due to the debt crisis and program “sequestration,” and the much bigger U.S. international investment in military aid (to the likes of Egypt and Israel) and military actions (in Afghanistan and Iraq)?—Rick Cohen