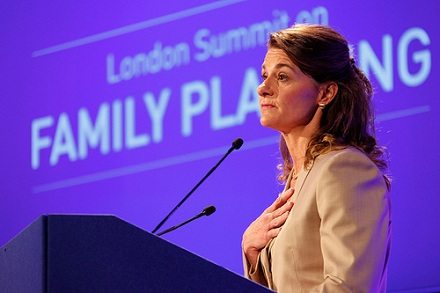 An editorial written by Giulia Galeotti for L’Osservatore Romano (the official Vatican newspaper) entitled “The risks of philanthropy”suggests that Melinda Gates is misinformed when she discusses contraception. Saying that the Catholic Church is not an opponent of birth control per se but of artificial contraception, it suggests that Gates and pharmaceutical firms are in cahoots. Pointing to the Billings method as the acceptable form of natural family planning, the editorial states colorfully that, “The unforgivable original sin inherent in this method is that it is a solution that is completely free. This makes it highly unpopular in the pharmaceutical industry which makes huge profits from the administration of chemical contraception. And this will be guaranteed through Mrs. Gates’ philanthropic actions.”

The Billings method depends upon a woman’s monitoring of her cycles and periodic abstinence. Critics contend it depends upon a woman’s complete control over her own body and upon her physical signs being entirely predictable and like those of the majority of women. According to Rachel K. Jones, the co-author of a 2011 Guttmacher Institute study in this area, “Data shows that 98 percent of sexually experienced women of child-bearing age and who identify themselves as Catholic have used a method of contraception other than natural family planning at some point in their lives.” [couldn’t verify the original stat with wording but this one is, I think, even more dramatic and I can verify it] –Ruth McCambridge