Veterans Now Have One National Service Map, But…

There is progress to report from the Department of Veterans Affairs. The VA has finally decided on a map of the United States: 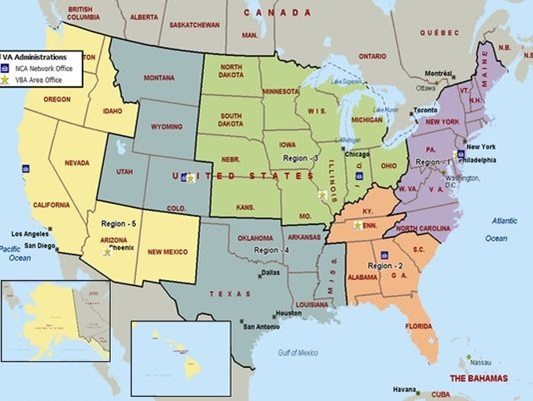 Apparently, the VA had been using as many as nine different maps of the country, each showing a different version of the VA’s regional structure. Now there’s one map with five regions. According to Leo Shane III for the Military Times, by midsummer, all VA agencies will be functioning within the five-region structure.

The regional reorganization is part of VA Secretary Bob McDonald’s “MyVA” program, intended to provide better service to veterans and to reduce the VA’s Kafkaesque bureaucratic structure. The idea behind the revised regions is to improve coordination and communication among VA agencies and programs, with more of an orientation toward giving veterans a single point of access into multiple VA services rather than the current dynamic wherein veterans have to navigate the bureaucracy on their own. The VA hasn’t detailed exactly how the regional reorganization will lead to better communications and coordination yet, according to Shane.

Some of that may be reflected—or not—in the President’s proposed VA budget for 2016. A coalition of veterans organizations announced earlier this week that the Obama budget, while an improvement over 2015 with its proposed eight percent increase in the VA budget, was still $1 billion short of what is needed. Investigative reporter Benjamin Krause suggests that “reorganization is code [for] downsizing” and predicts that the VA will be “letting go lots of workers” in the next year, despite the statement from Bob Snyder, the head of the MyVA office, who said that the reorganization is “not about losing jobs…[because] there is more than enough work to do at VA.”

For nonprofits, the reorganization doesn’t on its surface address a longstanding limitation of the VA regarding the department’s ability to partner effectively with nonprofit service providers. In a way, MyVA seems to be fundamentally geared to getting the various parts of the VA moving in sync. A recent and very informative VA report on veterans’ economic opportunities provides important data on veterans in the labor market and reviews the progress and limitations of the VA’s Vocational Rehabilitation and Employment program, such as its inability to provide career, job, and educational counseling for the families of separating veterans as well as the vets themselves. But the report’s conclusions on improving VA programs for veterans and their families reintegrating into the civilian labor force call for “more communication, collaboration, and coordination across organizations within the VA and among federal agencies committed to supporting Veterans’ success.” The report should have also called for the VA to engage in more effective and sustainable partnerships with community-based partners and to strengthen the nonprofit community support systems that need to operate robustly for the VA’s programs to succeed.

Maps are good, we agree. A regional reorg that overcomes bureaucratic barriers between programs within the VA is probably necessary. The intent of the reorganization, to improve communications and collaboration within the VA and between the VA and other federal agencies, needs to be broadened to include intra-regional cooperation and partnership with nonprofit service providers that can enhance and strengthen the VA’s support for veterans.—Rick Cohen