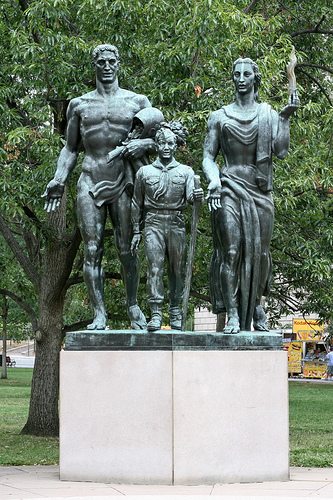 Drum roll, please. The Boys Scouts of America vote on partially lifting the ban on gay involvement in scouting is drawing nigh. Only a few days ago, NPQ reported that a recent poll showed the majority of Americans support gay involvement in scouting, and that an overwhelming majority of young Americans support same-sex marriage! Of course, as the vote nears, there are many voices chiming in to give their opinion on the proposal.

To recap, the Boy Scouts of America have been trying to decide whether or not to lift the ban on gay scouts and scout leaders. The new proposal is to allow people under the age of 18 who are openly gay to participate in scouting, but to maintain the ban on gay adults.

The National Review reported on a statement from the National Catholic Committee on Scouting. The statement is worded with great respect for BSA and the process it has gone through to make a determination on this “difficult” subject. However, the statement also references the Catholic Church’s earlier teachings and statements about same-sex attraction. Ed Whelan, author of the article in the National Review, believes that this statement should lead all Catholics to vote against the BSA proposal. The statement from the Catholic Committee does not actually say they oppose lifting the ban, nor what the Church might do if the ban is lifted. The statement preaches the importance of behaving with dignity and respect and that they will react when the vote has been taken.

Moving right along, the Heritage Foundation held a panel discussion, as reported in U.S. News and World Report. Having recently been accused of racism following a release of a report on immigration, the Heritage Foundation can also, now, be accused of homophobia in declaring that lifting the ban on gays scouting will increase “boy-on-boy contact.” One member of the panel is even quoted as saying that lifting the ban would lead to scouts lacking understanding about fatherhood, and that it would impede their growth to becoming upright young men. One panelist goes so far as to reveal a complete lack of sensitivity and awareness by saying lifting the ban would make it hard to regulate “innuendo…and symbols…and everything that comes as part of the gay culture.”

A voice of reason in this discussion comes from the Times of Israel with an article saying that Jewish scouting leaders support not just the compromise proposal the BSA will vote on, but a complete lifting of the ban. A.J. Kreimer, Chairman of the National Jewish Committee on Scouting, says that he believes the proposal in front of the BSA is flawed, that kicking a gay scout out when he turns 18 makes no sense, and that it is terrible to say that a gay rabbi would be banned from leading a scout troop. However, Kreimer says he will vote in favor of the proposal, because it is the best option right now and a step in the right direction.

The BSA vote comes up on Thursday, May 23.—Rob Meiksins