Voter Protection on Election Day: The Role for Nonprofits 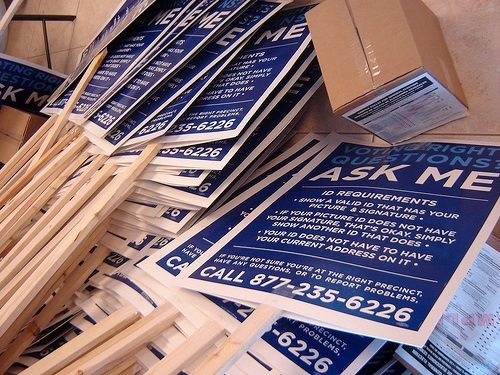 In Alabama on Election Day, an example of a voting rights issue that goes beyond voter IDs will be in play. In a state thoroughly dominated by the Republican Party, the lines to demarcate legislative districts have been drawn in such a way as to concentrate black voters in largely black districts that will, presumably, lean Democratic (a small number of districts, to be sure) and create other very white districts that will vote Republican. For example, in Montgomery, to bring State Senator Quinton Ross’s district up to its needed size, the state added 15,785 people—only 36 of whom were white. As the Washington Post described the situation, the Alabama practice makes white voting districts whiter, gerrymandered to an extreme degree of racial separation and polarization.

Like some of the state initiatives on voter ID programs, Alabama’s gerrymandering effectively disenfranchises many black voters. But minority voters, particularly black voters, have faced and are likely to face other problems with voting on Election Day in multiple states, including, as Stephanie Mencimer writes in Mother Jones, particularly long lines to vote. In 2012, black voters faced wait times at the polls that were twice as long as those faced by whites and almost one-third longer than the wait times challenging Latino voters.

Several national nonprofits will be monitoring today’s elections, giving special attention to states that have enacted changes in voting procedures that could effectively disenfranchise more voters. Under a coalition umbrella called Election Protection, the election-monitoring nonprofits include the Lawyers’ Committee for Civil Rights Under Law, the Advancement Project, the NAACP, and the League of Women Voters.

In an op-ed for MSNBC, the president and executive director of the Lawyers’ Committee for Civil Rights Under Law, Barbara Arnwine, wrote, “On this Election Day, instead of being heard, the voices of hundreds of thousands of voters may be silenced because of stringent new voting laws that have the clear effect of keeping eligible voters away from the ballot box.”

Arwine warned, “As voters, we must act as voting rights champions at all levels of advocacy and work in concert to lessen the pernicious effects of discrimination on the rights of American citizens.” To us at Nonprofit Quarterly, the voting rights champions on Election Day should be nonprofits as well—and not just those in the Election Protection coalition, because nonprofits have a core mission in defending and enhancing democratic rights in this nation.—Rick Cohen