On Human Creativity and the Liberal Arts: Walter Isaacson on Philanthropy 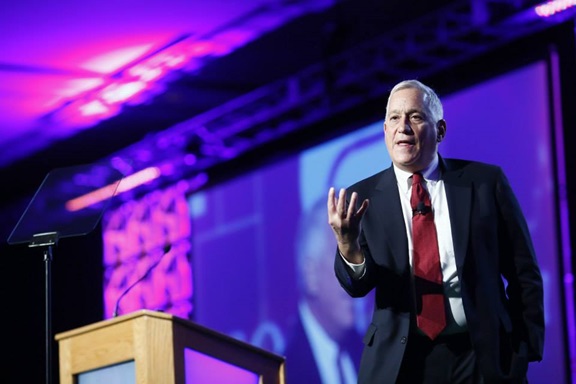 At the 2015 annual meeting of the Council on Foundations, the opening plenary’s star speaker was Walter Isaacson, the Chair and CEO of the Aspen Institute. His speech was delivered in TED-talk style, which seems to be the public speaking mode of many top speakers nowadays (Arthur Brooks, the CEO of the American Enterprise Institute, did the same at the conference). Those of us who are still dependent on things like notes and daises and such are quite envious, to be sure.

While much of what Isaacson addressed on the subject of collaboration was generically applicable enough to most attendees to garner him a standing ovation from the audience and gushing comments in the hallways, one point that didn’t seem to get a lot of COF attendee notice was particularly interesting—though we’ve heard Isaacson address it before in almost the same manner.

For speech material, Isaacson comfortably drew from the multiple biographies he has written about Benjamin Franklin, Steve Jobs, Ada Lovelace (the daughter of Lord Byron) and others to make his argument about technological progress as a collaborative activity, distinguishing the most successful innovators from others by their willingness to work together and share credit. But he also made a point about Steve Jobs regarding the importance of studying—and hopefully valuing—the liberal arts.

In 2014, Isaacson won “the highest honor the federal government confers for distinguished intellectual achievement in the humanities,” the Jefferson Lecture, given by the National Endowment for the Humanities, and spoke upon the same issues he addressed at the Council meeting, with this comment about Apple’s Steve Jobs:

“In his product demos, Jobs would conclude with a slide, projected on the big screen behind him, of a street sign showing the intersection of the Liberal Arts and the Sciences. At his last major product launch, the iPad 2, in 2011, he ended again with those street signs and said: ‘It’s in Apple’s DNA that technology alone is not enough—it’s technology married with liberal arts, married with the humanities, that yields us the result that makes our heart sing.’ That’s what made him the most creative technology innovator of our era, and that’s what he infused into the DNA of Apple, which is still evident today.”

To further make the point, in his Jefferson lecture, as he did in his Council on Foundations speech, Isaacson talked about scientists Albert Einstein and Ada Lovelace, who both valued the liberal arts:

We hope that the audience got the point—but we fear that it didn’t. It’s scary how little appreciation there is of the value of the liberal arts, even in philanthropy where there is immense grantmaking support for the arts themselves. It is as though philanthropy for the arts is a pleasant philanthropic artifact, but what’s really philanthropically useful is creating and re-creating lots of Silicon Valleys populated by STEM-obsessed geeks.

Political conservatives have been seen in recent years “trashing” the liberal arts, exemplified by Senator Marco Rubio’s (R-FL) witticism that college students ought to think hard about “whether it’s worth borrowing $40,000 to be a Greek philosophy major—because the market for Greek philosophers is tight” and Governor Pat McCrory’s (R-NC) statement on higher education funding, “I don’t want to subsidize [a major] that’s not going to get someone a job.” To be fair, we suspect that liberal politicians might say much the same as they focus on training inner-city kids to prepare them for the world of high tech employment.

Christopher J. Scalia, an associate professor of English at the University of Virginia (a school established by Thomas Jefferson, who both Scalia and Isaacson recognized as a defender of the importance of the liberal arts), wrote this defense of liberal arts in the Wall Street Journal last month:

“Apart from specific historical and philosophical knowledge, the liberal arts also provide general intellectual tools that reinforce democracy. Liberal-arts professors use the phrase ‘critical thinking skills’ so often that our students could turn it into a drinking game. But we do so because the term conveys a serious and valuable idea: Students who read and comprehend difficult works, engage with sophisticated ideas, and express themselves clearly are well suited to contribute to a representative government. Such a citizenry is valued by the left—speak truth to power!—but also by the right, which distrusts centralized power and promotes a stronger civil society.”

Isaacson said roughly the same in his 2014 Jefferson Lecture, and we think he did so at the Council meeting in San Francisco, too. In the 2014 lecture, he put it this way: “Human creativity involves values, aesthetic judgments, social emotions, personal consciousness, and yes, a moral sense. These are what the arts and humanities teach us—and why those realms are as valuable to our education as science, technology, engineering, and math.”

Let’s hope that in the philanthropic imperative to address critical issues such as job training and placement, improvement of public education, criminal justice reform (as promoted by plenary speakers Newt Gingrich and Van Jones), and civil rights (the focus of the plenary speech by the NAACP’s Cornell Brooks), foundations don’t leave liberal arts and the humanities at the curb, both for society’s benefit and for the effectiveness, vision, and, yes, the humanity of their own grantmaking.—Rick Cohen

More about: Arts and CultureCouncil on Foundations