War on Poverty, or Class War, or What? 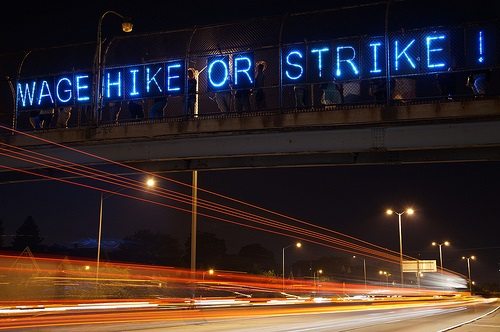 As we celebrate the 50th anniversary of the War on Poverty, NPQ will acknowledge the depth of the effect this struggle has had by going deep. We will be publishing our primary piece tomorrow with insights from people who have been involved—some in its earliest stages and some more recently—in all that long lasting strategy has accomplished. But here, on the day of the anniversary, is a short thought.

As someone who has been involved in racial and economic justice movements and in community development, the characteristic that I have most valued about the conceptualization and some of the practice of the War on Poverty over the years was its coupling of community activism and control with resources. It was the right impulse.

The missing piece was an understanding that the structure of the economy overall needed to change. “Unfettered” capitalism needed fettering. Around the time that the War on Poverty was announced, other groups were taking this on, but then the question became muted. Unions lost power and we became even more focused on consumerism…and then came Occupy. But as with all movements, constituency builds in its own way and at its own pace, building steam and voice.

As we covered in our newswire from December 16th, excerpted below, the year 2013 ended with “waves of labor protests from workers paid far less than a living wage.”

NPQ has covered the Walmart actions and the fast-food worker walkout, and we have been struck by the emerging numbers of how many of those workers are forced to depend upon government subsidization in order to get by. To us, this sounds like the government is subsidizing corporations who refuse to pay reasonable wages so that they can fully exploit their workers at will.

Now, Joan Walsh of Salon points out in a powerful editorial that 2013 appears to have been the year that this country acknowledged that the number of Americans who are not only working poor, but have been forced onto the public dole, is a crisis. She writes that, traditionally, Americans hate welfare, “so we’re not sure how to handle the fact that a quarter of people who have jobs today make so little money that they also receive some form of public assistance, or welfare—a proportion that’s much higher in some of the fastest growing sectors of the workforce. Or that 60 percent of able-bodied adult food-stamp recipients are employed.”

She writes that “fully 52 percent of fast-food workers’ families receive public assistance—most of it coming from Medicaid, food stamps and the Earned Income Tax Credit—to the tune of $7 billion annually, according to research from the University of California-Berkeley’s Labor Center and the University of Illinois.”

McDonald’s workers receive $1.2 billion in public aid, she points out, while the company earned $7.44 billion in profits, and paid their top execs $52.7 million, yet the study concluded that “public benefits receipt is the rule, rather than the exception, for this workforce.”

She goes on to say that one in three bank tellers receives public assistance according to the Committee for Better Banks, totaling almost a billion dollars annually in federal, state and local assistance. In New York, 40 percent of bank tellers and their family members receive public assistance. She writes: “Revulsion at subsidizing profitable corporations that pay poverty-level wages is helping fuel a wave of long-overdue organizing and protest on behalf of low-wage workers, from the fast-food strikes that have swept the country to Walmart protests this holiday season. Taxpayers recoil at the notion, but so do many workers themselves.”

Walsh points out in her conclusion that every dollar taxpayers spend subsidizing corporations paying poverty wages is a dollar not spent elsewhere.

Meanwhile, NPQ has had occasion to print innumerable graphs showing the increase in the wealth gap, but this table from the Washington Post WonkBlog that we reprinted on September 11, 2013, was particularly striking in that it showed that the fruits of the so-called recovery from the recession have mostly been enjoyed by the super rich. 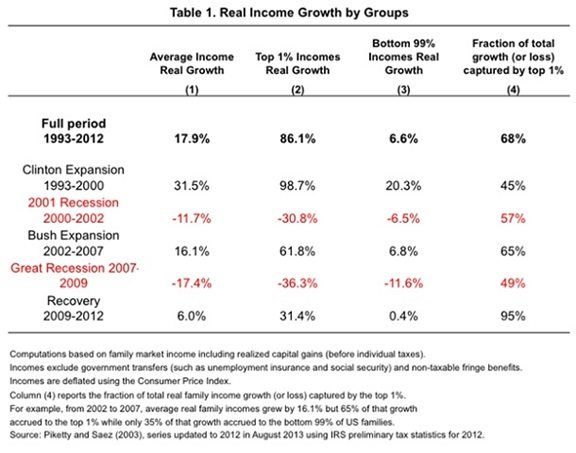 And then, at the end of the year, we published a set of trends and predictions in a piece called “As the World Turns.” Our leading trend was this one:

The country’s economy is unsustainably unbalanced.

As we go into a new year the message that seems finally to have gotten through is that millions of hard-working people across the country are unable to make ends meet without depending upon public benefits, even while the corporations they work for are making outrageous profits. Thus, we, the taxpayers, are paying into corporate coffers through paying benefits to their undercompensated employees.

This offends American sensibilities more than the information that our wealth gap is at its widest ever and that corporations have managed to claim most of the financial benefits of the recovery. Still, we are so locked into dysfunction by cutting millions off of long-term unemployment benefits in the new federal budget agreement.

NPQ published any number of newswires this year about the fact that the wealth gap is widening at an unprecedented rate. In fact, since the recession “ended” the top one percent of wealth holders have captured 95 percent of the fruits of the recovery.

So, on this 50th anniversary of the War on Poverty, Main Street and Wall Street are found to inhabit separate universes. The rules are different, and if we progress along the current route, the prognoses are increasingly divergent.

In this sector, our uneasy relationships with wealth and poverty are reflected in this excerpt from the newswire we ran on January 5th, printed below:

The Bloomberg Billionaires Index, a daily ranking of the world’s 300 wealthiest individuals, counts the net worth of the world’s top billionaires at US$3.7 trillion at the end of 2013, a gain of $524 billion from last year, and—what great news!—“The rich will keeping getting richer in 2014,” according to John Catsimatidis, the billionaire founder of real estate and energy conglomerate Red Apple Group. “Interest rates will remain low, equity markets will keep rising and the economy will grow at less than 2 percent.” Bill Gates is the poster child for this accumulation of riches with $78.6 billion, an increase of $15.8B.

Meanwhile, according to CNBC, Home Depot’s Ken Langone, who is Catholic and a billionaire, would appreciate if the Pope would be more circumspect on the subject of “unfettered capitalism.” As NPQ reported yesterday, this was the theme of his New Year address. But Langone recently met with Cardinal Timothy Dolan to talk over his concerns, telling the cardinal that if the pope persists in dinging the “culture of prosperity” that he says perpetuates indifference to the poor, it could make devout Catholics turn away from their goodhearted charity. Langone topped the whole concoction by sharing his belief that Pope Francis’ opinions could leave rich Catholics “incapable of feeling compassion for the poor.”

So for now, we would like to say that NPQ will take a special strong interest in the issue of economic justice over the coming year, and we would love your help and comments about where that should be focused.