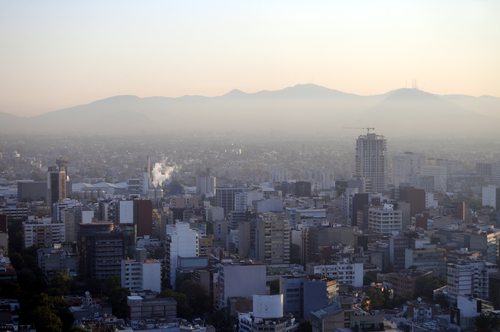 Mexico is beset by a huge drug crime and corruption epidemic, with pockets of murder rates that are unfathomable—witness the recent killing and burning of 43 students in the municipality of Acapulco. But the pernicious problem of a paucity of potable water, also linked in part to government intransigency, is rising to the surface in our southern neighbor’s most populous city.

At 22 million residents and growing as fast as any metropolitan area in the world, Mexico City faces a host of typical urban problems, including a lack of clean water resources. There is a convergence of causes, including current treatment of less than one-tenth of the city’s sewage, a delivery system with thousands of small leaks that divert forty percent of its potential contribution, lack of city and federal funding, fragmented responsibility for water management, politicians seeking to line their pockets, and the citizenry’s mistrust of government-initiated solutions. Existing water sources are drying up and the massive, sprawling metropolis is literally sinking due to the depletion of its aquifers, with geologists figuring a drop of forty feet within the last fifty years.

Typical of Mexico City’s de facto drought, environmental scientist Juan Jose Santibanez laments that for Iztapalapa, a city within a city of two million people, its over-the-ground patchwork delivery system falls direly short of sufficiency, stating that “there are 1,000 trucks [with 4000-gallon tanks] distributing water to two million people, which is nowhere near enough to meet the needs of those people.” Each truck may meet at most a week’s water demand for two families. City water taps provide a time-consuming and physically demanding alternative, especially in hilly areas, and this solves only a small fraction of the problem.

PBS NewsHour correspondent and director of the Project for Under-told Stories Fred de Sam Lazaro notes that some of the limited water supply is piped in from a neighboring province, and that the wizened citizenry of Mexico knows and fears its water supply and so “Mexicans consume more bottled water than any other nation.” It is a common understanding that water, as much as oil and diamonds, is a mounting political imbroglio around the world, and Santibanez fears the same for the city well within the next decade, stating, “There is a very high probability that, by 2020, there will be a mini-revolution, at least in Mexico City.”

Collection of rainwater may be a propitious solution in large part, but it is underutilized for many of the reasons stated above. Enrique Lomnitz, a Mexican engineer and businessman who returned recently to his home country from the United States to work on improving access to the waning water supply, has initiated a social enterprise to place rainwater collection and storage systems in homes and businesses at a thousand dollars a pop. Lomnitz states that some parts of the city are blessed with a high rate of rainfall and notes in Iztapalapa a typical result of the initiative he started: “[Iztapalapa] gets up to 1,500 millimeters. So a house like the one we’re in right now, for example, has 240 meters of roof, which is about enough for two low-income families to go all year.” Only 1,500 of his systems have been installed, with the small number due perhaps to their cost, which is prohibitive to most of the city’s populace, and dodgy politicians demanding bribes to enable further advancement of this simple and elegant “harvesting system.”

In any event, at least one official responsible for water management dismisses the viability of tapping this natural source. Ramón Aguirre Díaz, the director of the Mexico City Water Department, believes rainfall can only provide limited relief and is cost prohibitive. “It is less than 10 percent [of water needs], he says, “and that is being generous. To build infrastructure to capture the water, store the water, purify the water, it’s just not financially viable.” Aguirre has a more holistic perspective, believing in a passel of action: rainwater collection itself, along with fixing the leaks, more water recycling for bathing (perhaps this means more wastewater treatment), buffering the aquifers, and addressing the high demand by promoting greater water conservation.

Mr. de Sam Lazaro is skeptical, though, that much help is likely to come from the public sector, noting its built-in structural problem that prevents redress from the state: Single-term limits distract politicians from paying much attention to governance, their actual job, in favor of campaigning for new careers, and addressing the water emergency is just one of the casualties of this gross lack of attention and motivation to take action.

Mexico City is far from a unique victim of dwindling water supply due to relative geometric population and economic explosions throughout the globe leading to Malthusian growth. The American media is awash in coverage of water shortages across the United States, including California, Colorado, and Detroit. Add to this Mexico’s political instability and lack of singular governance over this natural utility, and it becomes crystal clear that this crisis may require political upheaval and popular unrest to force a realistic solution. Until then, Mexico City faces an unworkable conflict between limited water supply and unlimited demand.—Louis Altman