What Does Gov. Walker’s Appointment of Mike M. Grebe to U. of Wisconsin Board of Regents Mean? 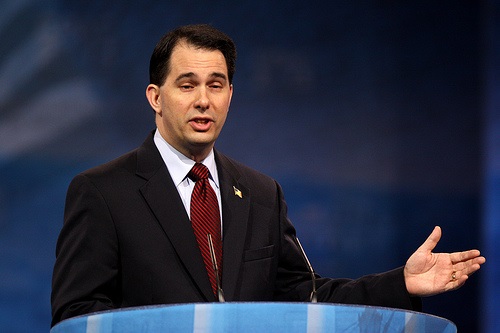 Not long ago, NPQ reported on the close relationships between the leadership of the Lynde and Harry Bradley Foundation and the Republican Party of Wisconsin, specifically with the various campaigns—gubernatorial, and perhaps now presidential—of Governor Scott Walker. Last week, we learned that Governor Walker appointed Mike M. Grebe to the University of Wisconsin board of regents. Mike M. Grebe is the son of Michael W. Grebe, the president and CEO of the Bradley Foundation.

The press release issued by the University of Wisconsin briefly described Grebe fils as the Executive Vice President & General Counsel for HUSCO International, a manufacturer of hydraulic components, and formerly a partner at the Quarles & Brady LLP law firm. “Throughout his professional career, Mr. Grebe has devoted much time to local nonprofits and serves on various boards of directors throughout the state,” adds the press release.

We checked for Grebe’s nonprofit bona fides beyond those of his father at the foundation and discovered that Grebe has had several. For example, he appears to have been a longtime supporter of the Milwaukee Chamber Theatre, which has mounted productions, such as Alan Bennett’s “Talking Heads” monologues, that don’t quite fit into the culturally conservative canon one might expect of the Walker presidential campaign.

As noted in the university press release, Grebe also has been a board member (the former chairman, actually) of the Columbia St. Mary’s Foundation, which supports the hospitals and clinics in the CSM network; a board member of the Zoological Society of Milwaukee; and president of the board of the elite Milwaukee Club, established in 1882 as the first men’s club west of the Allegheny Mountains.

Mike Grebe’s nonprofit background doesn’t sound all that grassroots-oriented, but he has been around major Wisconsin civic-oriented nonprofits. What might he bring to the university’s board of regents? Perhaps the question is better focused on what Walker has been doing with—or to—the university in recent months that he might expect regents like Grebe to address.

This past spring, Governor Walker proposed a 13 percent cut in higher education funding ($300 million over two years) but a conversion of the university to a “public authority model,” giving it more autonomy from the state. Notwithstanding the cut, the Walker budget also proposed to create a dedicated revenue source for the university. However, both parties in the state legislature whacked the notion of giving the university more autonomy from state government oversight, fearing that it was simply a prelude, given the cut, for huge tuition hikes.

Walker’s agenda for the university system contained more items that caused some political consternation. According to the Center for Media and Democracy, the Walker budget originally included a plan to change the university system’s mission statement, the so-called “Wisconsin Idea,” by deleting the references to public service, the improvement of the human condition, and “the search for the truth.” Walker seems to have acknowledged that there was something about changing the Wisconsin Idea, though he called it a drafting error, and his office has slow-walked disclosures about the language changes, defending its refusal to release certain documents due to “deliberative process privilege.” Still, why was this even a budget issue?

Some of the brouhaha about the University of Wisconsin emanating from the Walker gubernatorial operation is easily linkable to the interest of the governor in presidential primaries, especially in nearby Iowa where coverage of Wisconsin politics is substantial. Although the proposed budget cuts to the University of Wisconsin were unpopular among Wisconsin residents (70 percent opposed, according to one poll) and resisted by Republicans as well as Democrats, cutting the size (by giving the UW system more autonomy) and expenditures (by cutting the UW budget) of government is a good rock-ribbed conservative theme for Walker’s potential attractiveness to conservative primary voters.

That takes the issue full circle to Grebe fils. Where might he stand on UW autonomy, the UW budget, and the wording of the Wisconsin Idea? It is probably just a coincidence, but this year’s annual Bradley Symposium, sponsored by the Bradley Foundation, scheduled for June 3rd in Washington, D.C., is devoted to the topic of “The Future of Higher Education.” The speakers—Mitch Daniels (the former Indiana governor and now head of Purdue University), Andrew Kelly (the American Enterprise Institute), Peter Lawler (Berry College), Yuval Levin (the Ethics and Public Policy Center), and Alex Tabarrok (George Mason University)—are all well versed in the subject matter, but Mike M. Grebe would be a fascinating addition to the panel were he to be invited, because his commentary could potentially reflect the ideas of a leading Republican presidential candidate and might be quickly operational due to his role on the University of Wisconsin board of regents.—Rick Cohen