What Exactly Are Charter Schools Accomplishing for the Educational System? 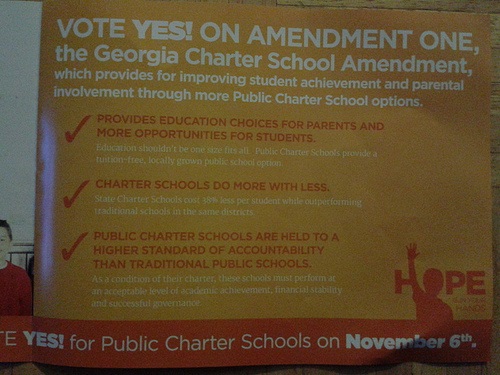 To understand where the leader of the nation sees charter schools, it is worth quoting from his proclamation at length:

“During National Charter Schools Week, we recognize the role public charter schools play in providing America’s daughters and sons with a chance to reach their fullest potential, and we recommit to strengthening our nation’s classrooms for all…. As independent public schools, charter schools are able to try new models of learning and methods that encourage academic excellence and set students on a path to success. They are laboratories of learning and incubators for the ideas of tomorrow, but this flexibility comes with high standards and accountability. When a charter school does not measure up—when one is underperforming and not improving—we must make the tough decision to shut it down. But when charter schools are successful, they can help spur systemic reform, and their approaches can be replicated in classrooms across America. Today, especially in some of our nation’s most disadvantaged communities, successful charter schools are an important partner in increasing access to a high-quality education and closing the achievement gap…. Today, our nation’s very best charter schools are gateways to higher education and endless possibilities, lifting up students of all backgrounds and empowering them to achieve a brighter future. This week, we honor the parents, educators, and civic leaders who make the vision of charter schools a reality, and we continue our work to safeguard the promise that an education—one that expands horizons, challenges minds, and inspires a new generation of thinkers, doers, and dreamers—is within the reach of every girl and boy.”

Paul Thomas, a professor at Furman University in South Carolina, took a critical eye to National Charter Schools Week, basically taking aim at the hype and overstatement behind the movement. Like the president’s widely circulated proclamation, Furman’s less-well-circulated essay on AlterNet also merits some extensive quotation:

“Political praise for charter schools emanates from both sides of the aisle; nearly every conservative call for education reform extols charter schools, with said accolades usually accompanying calls for the holy grail of free-market thinking in the educational realm: more parental ‘choice.’ But no amount of proclaiming and rallying can upend the evidence, which is not good for the charter school camp…Perhaps we should use this week less for celebration and more to seriously consider the evidence. What, exactly, are we meant to celebrate about charter schools? What have they achieved?

“Charter, public and private schools have about the same range of student outcomes. As Di Carlo stressed in his report, what we know to be true is that the type of school structure matters far less than what schools do and who the students are…. Are we celebrating charter schools for those ‘miracles’ that can serve as models for reforming all public schools? […] Miracle schools have overwhelmingly been discredited. They are not miracles at all, we discover, once the data are examined and the claims analyzed by researchers and scholars not associated with the schools…Strip away the unsubstantiated claims and you’ll see that the appeal of charters is mostly about ideology and emotion, amplified by stories of individual children who appear saved by charter schools.

“When the president asks us to celebrate and increase support for charter schools—which are essentially little different from the public schools they seek to reform—he has missed the larger point. We don’t need feckless celebration; what we need are the social reform policies and support of public schools that would render school choice entirely unnecessary.”

Both President Obama and Professor Thomas are struggling with a similar question: Exactly what are charter schools supposed to be demonstrating? Yardstick competition to improve public school systems is one thing, but it has become increasingly submerged in a wave of support for charter schools primarily because they aren’t traditional public schools. For those of us who actually had a hand in setting up (or, in this author’s professional experience, helping finance the real estate acquisition and development of) charter schools, sometimes the charter school celebration seems to be about something other than the educational experience of K-12 kids, either in charters or traditional schools.—Rick Cohen