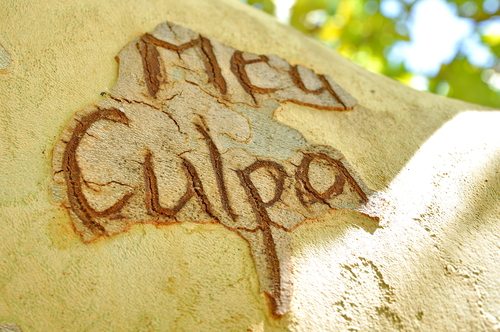 It is very difficult to find examples of people in responsibility actually taking responsibility for the crises and failures of the organizations they lead. “The buck stops here,” they’ll say, echoing President Harry Truman, but what that means is exceptionally unclear. For some, even when the failures they oversaw were egregious and destructive, they’ll continue to dig their fingernails into their office furniture until they are virtually dragged out of the executive office.

In the wake of the resignation of Veterans Affairs Secretary Eric Shinseki and Mary Barra’s recent announcement of the results of an internal probe of automobile recall problems at General Motors, it may be appropriate to ask where the buck stops in those large entities—and in our own.

News of the recent resignation of Tom Preston-Werner from the code-sharing high-tech entity called GitHub he founded doesn’t quite get to the issue, but circles close. GitHub wasn’t a nonprofit, but Tom’s wife did form a nonprofit called Omakase Charity that was geared toward getting high-tech people to participate or give to charity or some such sort of thing. Theresa Preston-Werner’s new nonprofit became the first accepted into the seemingly prestigious Techstars boot camp. Her theory was that the tech sector was full of charitably-minded people who simply lacked a “tech-friendly medium” for giving, if you can believe that. She got into trouble when staff at her husband’s firm complained that she was pressuring them—bullying them, even—to participate in her nonprofit.

There were additional charges of sexual harassment against the husband as well, but an internal investigation of some sort cleared him (though it said he had made “mistakes and errors of judgment”). Nevertheless, Tom Preston-Werner resigned, and subsequently, Theresa apologized for her having made GitHub employees—unintentionally, she says, feel pressured “for advice, labor, or to sign up.”

“As a result of my actions, in part, Tom left the company he founded,” she wrote in a statement.

Tom leaving because he had mismanaged the situation, Theresa apologizing for her role—all this would have been fine on its own had Tom’s resignation letter, titled “Farewell GitHub, Hello Immersive Computing,” not implied that he was working on new projects and had intended to leave anyhow. No one ever seems to leave because they simply screwed up. “I’ve made mistakes, and I am deeply sorry to anyone who was hurt by those mistakes,” Tom wrote. “It devastates me to know that I missed the mark, and I will strive to do better, every day.” Leaving it at that would have made Preston-Werner a different kind of CEO, but he then added a bunch of stuff about his side work on immersive computing, which made that, not the acceptance of responsibility, the focus of his letter.

Truth be told, it is hard to think of really good examples of CEOs whose statements of responsibility were followed up by acts taking personal responsibility. Admittedly, General Shinseki was in charge of a massive, stultifying federal bureaucracy that had demonstrated an imperviousness to change, but he was still the one in charge when the numerous Inspector General and GAO reports on VA hospitals falsifying waitlists for veterans waiting for treatment were received. Even after CNN’s exposés of the examples in Phoenix, he dodged speaking out on the matter for six months. His resignation wasn’t for mucking up, but because his continuing presence at the VA would be a distraction for whoever was assigned to clean up the place. That isn’t to say that he would have been a one-man wrecking machine dedicated to destroying the dysfunctional VA culture, but his responses saying that he had done a lot outside of the VA’s core healthcare functions suggest that he wasn’t strategically tackling what needed to be done to make the VA work.

After the IG and GAO reports documenting Phoenix-like problems throughout the VA for a decade, the president chose to ask for yet another IG report—the nineteenth since 2005 on delays in hospital appointments and medical treatment—concluding that the problems at hand, already well known and well documented, needed more documentation before action could be taken. Shinseki was purported to have voluntarily resigned after meeting with the president, but just before that meeting, Shinseki had delivered a speech that sounded like he intended to stay. Since the scandal broke, the deputy VA secretary in charge of healthcare has also announced his resignation, though he was scheduled to retire anyhow, and the director of the VA facility in Phoenix plus two of her staff have been placed on administrative leave.

Congress is debating how to give Shinseki’s successor more power to fire top managers. It is hard to believe that a cabinet secretary would be so hamstrung—not in dealing with line staff, but in dealing with Senior Executive Service personnel. The major decision that has been made to date is to curtail all future bonuses for senior VA personnel—a questionable policy to begin with, made embarrassing by the revelation that the Phoenix VA hospital director was one of the recipients of a sizable bonus after the news about her facility’s phony waitlists had been revealed.

Shinseki may have hit the bricks, but a culture of responsibility and accountability in the VA is still lacking. Remember how the latest news about problems at the Phoenix, San Antonio, and other VA hospitals came to the fore? It wasn’t from internal investigations or oversight by Shinseki’s staff, but information from whistleblowers—a doctor in Phoenix, a clerk in San Antonio—who were then treated more like criminals than heroes in revealing the VA’s problems. To improve the VA, or GitHub, or other public, nonprofit, or private sector entities, executives have to be prepared not only to take responsibility, but to have avenues for whistleblowers to tell them what might be going wrong—and then to listen.

Despite all of the whistleblower legislation enacted in this country in recent years, the culture for whistleblowers throughout the nation is still pretty poor, and that goes for nonprofits and big corporations as well. It shows in the questionable validity and reliability of “internal investigations.” After the charges concerning veterans who died while waiting for treatment in Phoenix, VA officials suggested that the numbers had been inflated. In early June, the acting VA secretary, Sloan Gibson, acknowledged that 18 veterans had in fact died while waiting for fudged appointments at the Phoenix facility.

If one needs a current case study of the dubiousness of internal investigations, it is the announcement of the General Motors investigation of the company’s failures to fix a deadly safety defect in an ignition switch on GM cars. CEO Mary Barra’s announcement described a decade of neglecting to fix the defect, which resulted in 13 deaths. Fifteen GM staff, including a VP for regulatory affairs and a senior product responsibility lawyer, were dismissed for negligence and incompetence, but the report absolved top management—including Barra, who has worked for GM for 30 years and was a senior manager before taking the company’s driving wheel—of any intentional wrongdoing such as intentionally covering up the defect.

A Reuters investigation counted not 13 deaths, but potentially 74 deaths linked to the faulty ignition switches. The Reuters account counted front-seat deaths as well as others. What did GM count—or not count? Why might GM underestimate the ignition switch deaths? Liability, perhaps? To an outsider, given Mary Barra’s history in the company, it seems virtually impossible for Barra to disclaim personal responsibility for a decade’s worth of deaths, not to mention additional injuries. What did the VA count—or not count—to arrive at 18 deaths at the Phoenix VA hospital?

Barra apologized (citing her feelings as a mother), Shinseki apologized (citing his sense of responsibility as a general), Preston-Werner apologized for making errors, but these internal investigations simply don’t cut it as mechanisms that identify where the buck ought to stop.

“The buck stops here” is easy to say. In the case of GM, and so often in other organizations, the question is not about stopping the buck, but passing it. Remember the phony grants to nonprofits as earmarks from New York City councilmembers? The chairperson of the City Council, Christine Quinn, held a press conference, at one point repeatedly announcing that the buck stopped with her and that she had to “take responsibility, obviously,” but what the buck might be and what responsibility might mean were left on the table. When Truman made his statement, he was pointing out that responsibility must be taken by someone; when things really go bad, some identifiable human must be held to account with consequences. Unfortunately, in our lives in the public, private, and nonprofit sectors, the buck never seems to stop anywhere, especially with the message-management and damage-control that so often overtake the simpler strategy of simply telling the unvarnished truth.

Poor Harry Truman. Personal responsibility and accountability are difficult qualities to discern in our world crafted by public relations. Here’s where we think the buck really stops: when whistleblowers and watchdogs rise to the front and point out where GM, the VA, and other institutions are falling seriously short of their fulfilling their missions and their responsibilities. It’s just too easy to pass the buck otherwise. The modern practice seems to be that major figures will say they accept responsibility, but divide that responsibility from accountability. The latter belongs to someone else.