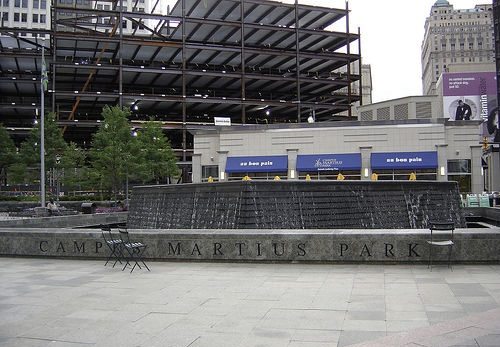 The Detroit News reports that the American Civil Liberties Union of Michigan has brought a federal lawsuit against a private group managing Campus Martius Park. The suit claims that the park, along with its security team, has violated the free speech of two groups of marchers by evicting them from that park. The park, presumably, should be a public space since it is city-owned, but it is managed by a nonprofit (Detroit 300 Conservancy) on the city’s behalf and was funded and designed by a group made up of businesses and philanthropies.

“With the growing number of city assets being overseen through public-private partnerships,” said a spokesman for the ACLU, “citizens cannot allow public spaces to be converted into Constitution-free zones,”

In two incidents, protestors were told to leave the park. According to this report:

“In June 2013, about 15 to 20 members of Women in Black–Detroit were confronted by security as they tried to march single file through the park as part of a silent protest against violence. The guard forbade them from walking through the park.”

Robert Sedler, a Wayne State University professor of constitutional law, thinks the ACLU has a good case. “Campus Martius is a public park,” Sedler said Wednesday. “People are allowed to protest in a public park. It doesn’t matter if it is managed by a private firm.”—Ruth McCambridge