Where Did the Occupiers Go? 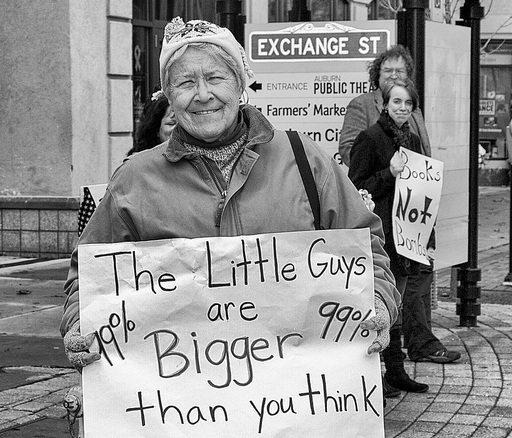 What happened to the plans for a revival of the Occupy Wall Street movement after a winter in which most domestic Occupy encampments were dislodged by police actions and, typically, prohibited from regrouping in ostensibly public venues?

On the 4th of July, a multi-day event in Philadelphia billed as the “first-ever national Occupy gathering”—which quickly took on the sobriquet of “#Natgat”—came to an end. One of the more consistent journalistic entities monitoring and providing generally positive reports on the Occupy Wall Street movement from its inception, Yes! Magazine, sent its web editor, James Trimarco, to monitor the proceedings at Occupy’s national gathering. One of the key #Natgat activities was a visioning process meant to articulate the change that the latest conglomeration of Occupiers would like to see. Trimarco reports that the document was “rumored” to be 75 pages long. NPQ explored the national gathering website, where there was a link for people who wanted to participate in the visioning process, but we found no document detailing the visioning that occurred in Philadelphia.

Among the multiple #Natgat debates was whether Occupiers should be fielding their own slates of candidates for electoral office. Whether or not the Occupy movement were to choose to follow the Tea Party model with Occupy-endorsed candidates, it’s a little late in the game for the 2012 cycle, especially with the Occupiers’ predilection for a consensual decision-making style requiring 90 percent approval from whoever happens to be part of the decision-making process at any particular point. In any case, unlike the Tea Party’s firm footing in the Republican Party, some of the tenor of discussions at #Natgat reported by Trimarco and others suggests that the Occupy movement is hardly part of the mainstream Democratic Party apparatus.

Blogger Zachery A. Bell quoted Truthdig columnist (and former New York Times reporter) Chris Hedges delivering a rip-roaring speech attacking the “monstrosity of faux liberals like Bill Clinton and Barack Obama” and advocating Occupy’s adoption of the goal “to reverse the corporate coup d’état and put the power back in the hands of people.”   A June column in Truthdig by Hedges himself devotes several paragraphs to one of the early D.C. occupiers, Kevin Zeese, who uses the Democratic Party’s failure to oust Republican Gov. Scott Walker as national gathering website

While Trimarco reports that, “Occupy participants from every region of the United States poured into Philadelphia…for the movement’s National Gathering,” even Trimarco’s upbeat article conveys a sense of a much smaller turnout than organizers expected or hoped. One has to wonder where the movement will go. The various news articles, though relatively few, and blog postings on the national gathering emitted different impressions of the event. Some of it had the feel of the late 1960s/early 1970s Yippies of Jerry Rubin and Abbie Hoffman, creatively poking fun at the hypocrisy of American politics and American corporations. Another swath sounded somewhat angrier, feeling that the structures of this nation’s socio-economic inequities needed more direct confrontation. A third subgroup appeared to be the “black bloc” anarchists who appear to desire confrontation with the police.

It doesn’t add up to a coherent movement at the moment, at least in the absence of a compelling narrative lurking in the visioning document, but speaking for the national movement may not have been the goal in the first place. Headlined as “fragmented unity,” one report on the plans for the national gathering suggested that the visioning process was not intended to generate a coherent platform for Occupy. Rather, the gathering would not attempt “to speak for Occupy Wall Street, the Occupy movement as a whole, or anyone beyond those in attendance.”

Rob Kall of OpEd News described #Natgat as “powerful, visionary, exciting, FUN.” A participant in the gathering, Kall concluded with a vision of the Occupy movement’s evolution and future:

“People wonder what the future of the Occupy movement is. I left the gathering very optimistic and hopeful. The energy, creativity, dedication and passion manifested by all ages is extraordinary. The encampments are gone. So be it. The future of Occupy is in the people already in it and those who discover it and who the current people awaken, who will act as catalysts, moving the people of the world from a top down culture of dinosaurs to a bottom up, horizontal, direct democracy world of little mammals. That’s how evolution happened. That’s how the metamorphosis of Occupy will shake the world and, from the bottom up, make the biggest changes seen since civilization began.”

In any circle, there’s no real doubt that the Occupy Wall Street movement had has an enormous impact on our society by cementing the issue of wealth disparity into American political discourse. The Christian Science Monitor notes that “Today’s politics revolves around campaign talk of ‘the wealth gap,’” evidence of the Occupy movement’s impact. Did that serious element of impact fade away as the encampments were dislodged and the Occupiers dispersed? Or is Kall correct that there is still a dynamic of direct democracy impacting the political system?

One answer might be found in the recent decision of the Oakland City Council to terminate its investment relationship with Goldman Sachs in a controversy concerning LIBOR rates, the exact topic of a presentation by Rolling Stone’s Matt Taibbi at #Natgat. The Council’s unanimous resolution to sever the city’s relationship with Goldman Sachs specifically cited options suggested by the “Stop Goldman Sachs Coalition,” which Forbes reports is linked to the Occupy movement.

It is not clear how linked these local Occupy efforts are to the national gathering, but a number of observers have noted that while the encampments may be largely gone, and while the Occupy “General Assembly” in New York City is not functioning, local Occupy actions continue nonetheless. The Nation’s Jeremy Brucher reports that, “In New York City (the example I know best), more than fifty OWS working groups and other collectives meet face-to-face at least once a week and maintain almost daily online interaction.” Meanwhile, OWS’ers recently followed billionaire industrialist David Koch to the Hamptons on Long Island to protest at his $50,000 a plate dinner fundraiser for Mitt Romney. Also, various interests are drawing energy from and emulating the Occupy movement, such as the “Vote 17” campaign, which seeks to lower the minimum voting age.

In the wake of the national gathering and with the upcoming September 17th anniversary of the Zuccotti Park encampment, there has been a spate of articles asking—much as we are asking here—what the future of the Occupy movement holds in store. Some are eulogies for a movement seen as having become lackluster. Some are critiques from the right charging that efforts to revive Occupy such as #Natgat are fronts put on by MoveOn.org puppeteers. Other critiques come from the left, such as Alexander Cockburn’s complaint in CounterPunch about Occupy’s protracted consensual decision-making process, its lack of a plan, its “endless speechifying,” and what he sees as its naïve or arrogant dismissal of social movements that have preceded it—for instance, those who opposed McCarthyism in the 1950s or the New Left organizing of the 1960s.

But it’s important to remember that the American left has hardly been monolithic in any of these past moments. In the 1960s, for example, for all the hard-edged organizing that was occurring, often in universities with the mobilization of students against the Vietnam War, there were many streams of protest. Just look at the composition of the “Chicago Eight” arrested at the Democratic National Convention in 1968; it included Yippies, a pacifist, a future California Democratic politician, members of Students for a Democratic Society and a Black Panther. Similarly, no one group of Occupiers encompasses the entire opposition to what Cockburn calls the “American empire.” The Occupy movement may not currently have much of an impact in some arenas of political life, but it has the ability to pop up with grassroots protests and direct actions—for example, at corporate shareholders’ meetings—to call attention to a broader political or economic issue.

Trimarco’s report in Yes! seemed to capture the fun aspect of the Occupy national gathering, taking special note of “a baseball game that pit the 99% against the 1% Tax Dodgers, and a ‘Wells Fargo Circus’ in which ersatz bankers forced acrobats playing the role of loan applicants into all kinds of contortions—literally.” For Trimarco, “These moments showed off the movement’s talent for comedy, costumes, and playfulness.” It would not be belittling at all to suggest that the evolution of the Occupy movement has led it to recapture some of the ethos of Abbie Hoffman’s Yippies, and maybe this aspect of the Occupy movement will be on display at the Democratic and Republican national conventions, just as it was in Chicago 44 years ago. Just don’t confuse the fun, creativity, and comedy for any lack of serious intent on the part of those pushing the evolution of the Occupy movement.