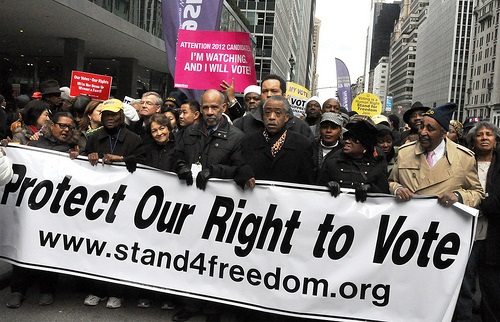 One issue back in the news this Martin Luther King, Jr. Day is voting rights. In 2013, the Supreme Court invalidated the part of the Voting Rights Act of 1965 that required nine states (and parts of six others) with histories of racial discrimination to get federal government approval for any changes they might wish to enact in terms of the conduct of elections. The Justice Department had the ability to review and overrule restrictive voting legislation, such as voter ID laws, in those states. The Court concluded that the formula and the data used to identify the states for election review were out of date.

Congressional Democrats pledged to push for an update to the Voting Rights Act to restore those provisions of the act that the Court had overturned, but House Judiciary Committee Chair Bob Goodlatte (R-VA) pronounced new amendments to the legislation unnecessary.

“To this point,” Goodlatte said, “we have not seen a process forward that is necessary to protect people because we think the Voting Rights Act is providing substantial protection in this area right now.”

Democrats responded with shock to Goodlatte’s conclusion that the Voting Rights Act was strong enough as-is. It shouldn’t have been a surprise. A bill to amend the Voting Rights Act introduced last year by Rep. John Conyers (D-MI), Rep. Jim Sensenbrenner (R-WI), and Senator Pat Leahy (D-VT) never received a vote—even though the Sensenbrenner bill excluded voter ID laws from challenge. The legislation will probably do no better in the new Congress; the Republican dominance in the House is even stronger than it was last year and the Senate has a Republican majority.

In what seems an odd way to celebrate Martin Luther King Jr. Day, five white residents of Dallas County, Texas, sued the county for violating the voting rights of white people. The suit was filed on the plaintiffs’ behalf by the Dallas-based Equal Voting Rights Institute, charging that, “Like something out of the bad old days, a southern electoral body [is] playing naked racial politics, intentionally using its power to minimize a dissenting race’s political sway.”

The irony here is twofold:

The Equal Voting Rights Institute, apparently not much more than a year old, has four board members: Dan Morenoff, the executive director and chairman of the EVRI board who ran briefly for the Republican nomination to challenge Rep. Eddie Bernice Johnson (D-TX) in the 30th Congressional District; Eric Hall, whose LinkedIn bio notes his service as vice-chairman of the Texas Young Republicans PAC; Matt Rinaldi, who ran as a Republican for the Texas House of Representatives; and Chart Westcott, who also ran as a Republican for the House. The Dallas Commissioners aren’t black, but they are Democrats—four out of five. Apparently, in the minds of the EVRI, domination by Democrats, even if they are white, is evidence of discrimination against whites.

It is a little bit perverse to see the Voting Rights Act weakened, Congress unwilling to amend and strengthen the law, and a group of Republicans using the Act to complain that a Democratic majority on a county commission constitutes discrimination against whites. What would Martin Luther King, Jr. think?—Rick Cohen