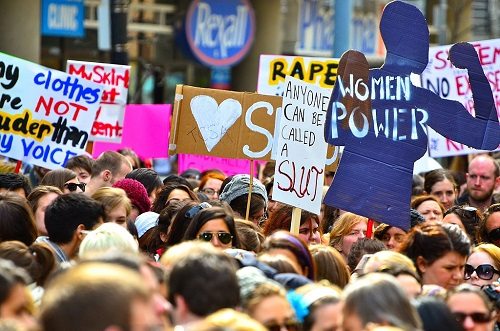 The White House’s new campaign to end the culture of sexual assault on college campuses is a star-studded affair. President Barack Obama and Vice President Joe Biden launched the initiative last Friday and included a video introducing the motto of the campaign: “It’s on us.” The public service announcement video includes Jon Hamm, Kerry Washington, Joel McHale, Randy Jackson, among others, and encourages bystanders to “get in the way” and “take responsibility” of sexual assault.

“We’re confident with this initiative—which includes everyone, with full engagement—we will be able to end sexual assault and change the culture of sexual assault,” said a senior White House official last Thursday.

While asking everyone to take on the burden of preventing and stopping assault on campuses, the campaign has a special focus on targeting men.

The most recent initiative builds on the Task Force on Sexual Assault that was formed earlier this year in January. Later, in April, the White House released its first report as a set list of recommendations to universities, including “engaging men” to specifically to be more involved in the awareness of and fight against sexual assault on college campuses. Around this same time in May, NPQ commented on the implications of the Obama administration releasing the names of the colleges that were being investigated for their handling of campus sexual assault cases.

A nonprofit group, Futures Without Violence, recently launched their own campaign entitled “The Other Freshman 15,” in reference to the first 15 weeks after a student begins college, during which she is at a greater risk to fall victim to assault. The letter-writing campaign is aimed at communicating with university administrators and imploring them to address the issue on their campuses.

In response to the White House’s recent campaign, Lonna Davis, the director of the nonprofit’s children and youth program, commended the administration’s approach with engaging men because it needs “to invite them, and not indict them, into the conversation.”

While the campaign is aimed at university administrations and students, rape culture doesn’t end where the campus does. The initiative comes at an opportune time when in the last few weeks the NFL has been fielding criticism for its handling of Ray Rice’s domestic violence case. NFL Commissioner Roger Goodell was prompted to release a statement that the NFL was partnering with a domestic violence hotline and the National Sexual Violence Resource Center in response to the recent high profile cases involving players.

Whether related or not, the atmosphere was ripe for some kind of cumulative response by the administration. “Today’s announcement is a critical part of the administration’s work to prevent sexual assault, but it is not the final step,” officials said in a fact sheet issued Thursday. “Our efforts to improve enforcement, transparency and accountability will continue.”—Shafaq Hasan