Who Is Corporate Philanthropy for? Arundhati Roy Says It’s Not Who You Think 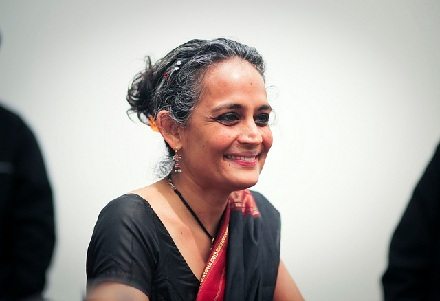 Although many people admire Arundhati Roy for her Booker Prize-winning novel The God of Small Things, those of us who have followed her career know that for the past two decades, she hasn’t been writing novels. Her life is devoted to anti-capitalist and anti-corporate political activism; it’s worth reading her latest book, Walking with the Comrades, for an example of her trenchant analysis, whether you agree with her perspective or not. In a recent long-form posting on ZNet, Roy takes on wealth disparities in India and the role of capitalism in creating and perpetuating them.

Like someone critiquing the proposals of the current crop of American presidential candidates, Roy starts her essay by pointing to the wealth and extravagance of India’s richest man, Mukesh Ambani. Ambani serves as an example of one of the increasing but still tiny number of people among the 1.2 billion Indians who control the nation’s wealth, and according to Roy, the 100 richest Indians own assets equivalent to one-fourth of the nation’s GDP. Ambani is worth $20 billion and the company he controls, Reliance Industries Limited (RIL), has a market capitalization of $47 billion. Roy writes that RIL is “one of a handful of corporations that run India” and their rapid growth, she says, is in accordance with the “rules of the Gush-Up Gospel,” which state that “the more you have, the more you can have.”

For India, “Trickledown hasn’t worked,” Roy writes. “But Gush-Up certainly has.” And it’s not just Roy’s analysis that makes this piece worthy of your time. It’s also her utterly stunning prose. Take, for instance, this passage: “As Gush-Up concentrates wealth on to the tip of a shining pin on which our billionaires pirouette, tidal waves of money crash through the institutions of democracy—the courts, Parliament as well as the media, seriously compromising their ability to function in the ways they are meant to. The noisier the carnival around elections, the less sure we are that democracy really exists.”

Roy’s analysis moves from the influence of corporate India to the dynamics of the Indian political system, and from the nation’s corporate-serving military apparatus to the topic of “Corporate Philanthropy” (Roy’s capitalization). The latter should be of much interest to the nonprofit sector, be it in the U.S. or abroad.

What does corporate philanthropy look like in India? Roy offers us a glimpse. To improve the reputation of corporate India among the Indian middle class, Roy notes that mining corporations have embraced the arts. Vedanta, a company with the corporate slogan “Mining Happiness,” sponsors a “Creating Happiness” film competition emphasizing messages of sustainable development. The Jindal Group supports major artists who, Roy says, “naturally work with stainless steel.” Tata Steel (which carries the slogan “Values Stronger than Steel”) and Rio Tinto are among the sponsors of the Jaipur Literary Festival, where Oprah showed up to say she loves India. Roy points out some of the controversial and often scandalous practices associated with these corporations—from XXX to YYYY—but notes how in India (just like the U.S.), people often turn a blind eye to corporate perfidy when it is ensconced behind a wall of corporate philanthropy:

“(W)hich of us sinners was going to cast the first stone? Not me, who lives off royalties from corporate publishing houses. We all watch Tata Sky, we surf the net with Tata Photon, we ride in Tata taxis, we stay in Tata Hotels, we sip our Tata tea in Tata bone china and stir it with teaspoons made of Tata Steel. We buy Tata books in Tata bookshops. Hum Tata ka namak khate hain. We’re under siege.

If the sledgehammer of moral purity is to be the criterion for stone-throwing, then the only people who qualify are those who have been silenced already. Those who live outside the system; the outlaws in the forests or those whose protests are never covered by the press, or the well-behaved dispossessed, who go from tribunal to tribunal, bearing witness, giving testimony.”

Roy is also tough on the favored nonprofits of the U.S. foundations—for example, describing how “Mohammed Yunus and the Grameen Bank brought microcredit to starving peasants with disastrous consequences. Microfinance companies in India are responsible for hundreds of suicides—200 people in Andhra Pradesh in 2010 alone. A national daily recently published a suicide note by an 18-year-old girl who was forced to hand over her last Rs 150, her school fees, to bullying employees of the microfinance company. The note said, ‘Work hard and earn money. Do not take loans.’”

Corporate Philanthropy in the U.S.

Roy looks at corporate philanthropy in the U.S. as the basis for understanding what is happening with the philanthropy of Indian corporations, pointing out that over time, “as people witnessed some of the genuinely good [deeds] the foundations did (running public libraries, eradicating diseases)—the direct connection between corporations and the foundations they endowed began to blur. Eventually, it faded altogether. Now even those who consider themselves left-wing are not shy to accept their largesse.”

She adds, “Corporate-endowed foundations administer, trade and channelise their power and place their chessmen on the chessboard, through a system of elite clubs and think-tanks, whose members overlap and move in and out through the revolving doors. Contrary to the various conspiracy theories in circulation, particularly among left-wing groups, there is nothing secret, satanic, or Freemason-like about this arrangement. It is not very different from the way corporations use shell companies and offshore accounts to transfer and administer their money—except that the currency is power, not money.”

Ultimately, Roy’s analysis is that corporate philanthropy is—regardless of good intentions and fine programs—still promoting corporations and capitalism: “Like all good Imperialists, the Philanthropoids set themselves the task of creating and training an international cadre that believed that Capitalism, and by extension the hegemony of the United States, was in their own self-interest…(C)orporate or Foundation-endowed NGOs are global finance’s way of buying into resistance movements, literally like shareholders buy shares in companies, and then try to control them from within…alert to every impulse, careful never to annoy the governments of their host countries. (The Ford Foundation requires the organisations it funds to sign a pledge to this effect.)” She adds, “The mandate of most NGOs, in particular the well-funded ones, is to further the project of corporate globalisation, not thwart it.”

We don’t often find people writing in such beautiful prose about arcane and often minuscule policies affecting charity and philanthropy in the U.S. But Roy’s essay should also lead readers to think deeply about the tradeoffs we are making via the nonprofit sector’s close and frequently uncritical relationship with corporate philanthropy. Read the full text. You will find that Roy doesn’t blindly condemn nonprofits, scholars, writers, or artists for accepting corporate largesse. She is asking for deep thinking on corporate (and foundation) philanthropy as to whose interests are being served and whose are not. –Rick Cohen