Who Knew There Were So Many Socially Conscious Ways to Repurpose Old Buses? 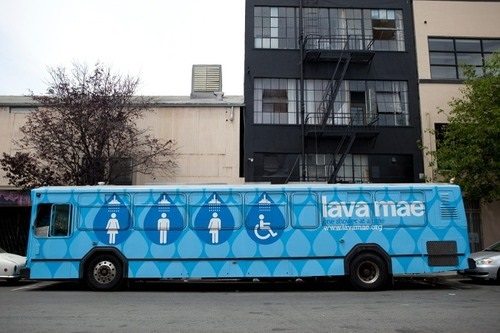 Beginning June 28, San Francisco’s homeless population will have access to an amenity many of us take for granted: a shower. A new nonprofit, Lava Mae, has found a way to convert an old city bus into a mobile shower facility that will provide as many as 130 showers a day. While the engineering and plumbing were tricky and the city initially had concerns about how the wastewater would be handled, those problems have been resolved.

Lava Mae founder Doniece Sandoval took her inspiration from the city’s food trucks, and her motivation from the fact that San Francisco only has seven facilities with showers available for more than 6,000 homeless individuals. Most of those facilities are centrally located and therefore not accessible to many of the people who would like to use them. To see how a passenger bus was converted to a mobile shower facility, watch this video:

The first bus will allow Lava Mae to test and refine the model. By next spring, the fledgling organization hopes to be operating four mobile shower buses, providing about 2,000 showers a week throughout San Francisco. And they’d love to see the concept spread to other communities, too.

“Lava Mae is not about ending homelessness,” Sandoval says. “What we are about is providing hygiene, because we believe that hygiene brings dignity, and dignity opens up opportunity.” Each visit to a Lava Mae bus will last about 20 minutes, which Sandoval notes will offer 20 minutes of both refuge and privacy—something many homeless people don’t often get to experience.

But wait, there’s more. It turns out Lava Mae isn’t even almost the only organization that has figured out how to give an old bus a second life while addressing community needs:

NPQ wants to know: What other causes are being served in our sector by repurposed buses? Or, what might your nonprofit do if someone donated a bus to help you deliver your mission?—Eileen Cunniffe