Who Owns the Rimonim? Congregations Fight over Bells, Tradition & More 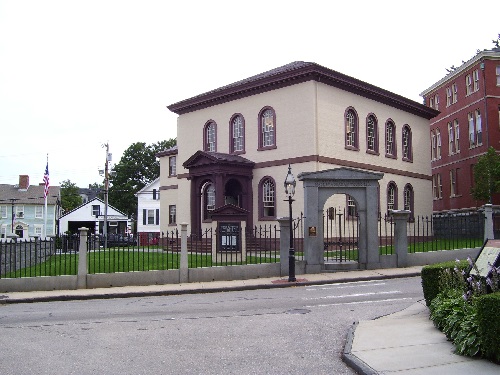 The Tuoro Synagogue in Newport, Rhode Island, was founded in 1763, but the temple was closed by the early 1800s and ownership was transferred to Congregation Shearith Israel in New York, the nation’s oldest Jewish congregation. Though services eventually resumed once the local Jewish population grew later, ownership remained with Shearith Israel. That arrangement lasted until 2012, when the Newport-based congregation Jeshuat Israel tried to sell a set of rimonim, the bells that are placed on the handles of a Torah scroll, worth an estimated $7.4 million to Boston’s Museum of Fine Arts. The bells, estimated to be 250 years old, are already on loan to the museum. While the sale has since been cancelled, the ownership of the building and its contents has landed up in court.

Courthouse News contains a vivid description of the court hearing yesterday, written by Marimer Matos. Here is part of the exchange:

As the federal trial over the rimonim finally kicked off Monday in the birthplace of religious freedom, Shearith Israel president Louis Solomon lamented Jeshuat Israel’s “chutzpah.”

“Selling your birthright is not a good idea,” he said. “Selling someone else’s is even worse.”

A seeming font of proverbs, Solomon also remarked that Jeshuat Israel has “gone astray and they need to be brought back.”

“You can’t sell what’s not yours,” Solomon added.

Jeshuat Israel’s attorney Gary Naftalis presented a different image of the congregation, saying everyone but the rabbi who works there does so as a volunteer.

With his client “one unexpected expense away from financial disaster,” Naftalis said Jeshuat Israel planned to put the proceeds of the sale in an irrevocable trust.

Since Jeshuat Israel has two pairs of rimonim, it wanted “to keep the flame burning” by selling off one pair, Naftalis said.

Holding his eyeglasses in one hand and a cup of water the other, Naftalis told the court Shearith Israel may “own the pen, but they haven’t put much ink in it.”

While lawyers for the Newport congregation say that Congregation Shearith Israel is basically an absentee landlord, contributing nothing toward the historic building’s maintenance, Michael Katz, vice president of the New York congregation, testified on Monday, “We were aghast they could do this without informing us. […] We own them. Just as importantly, we do not sell our religious objects. It’s a very strong principle. If you’re paying ransom to a kidnapper, you can sell religious objects. Otherwise, you cannot.”

Shearith Israel now wants not only to block the sale of the bells but also to evict the Newport congregation.

This reminds us of the dispute in Scituate, Massachusetts where the Catholic Archdiocese wants to evict the congregation that has occupied the St. Frances Xavier Cabrini Roman Catholic Church for more than a decade in defiance of notices to vacate. Who owns a place of worship and the religious items therein—the worshippers, or the “owners”?—Ruth McCambridge