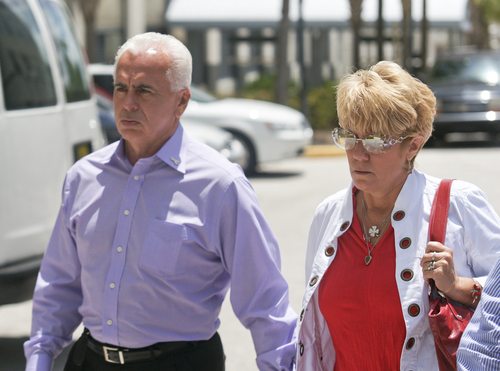 The Orlando Sentinel reports that Dr. Phil got Cindy and George Anthony, the parents of Casey Anthony and the grandparents of Caylee Anthony, to appear on his eponymous television show last September. Were they paid? The Sentinel doesn’t say so, but it reports on a People magazine article that says that Dr. Phil McGraw did pay $600,000 to Caylee’s Fund. Was it a quid pro quo or did McGraw simply happen to feel motivated to contribute to the charity at around the same time that the elder Anthonys appeared on his show?

As of last month, the charity was dissolved, with $100,000 left in its coffers that was distributed to three other charities according to the grandparents’ attorney, Mark Lippman. People believes that the McGraw payment went to support Casey Anthony who, as everyone knows, was acquitted of her daughter’s murder.

Actually, papers [PDF] dissolving the entity known as Caylee’s Fund Foundation were filed with the Florida Secretary of State in May, signed by Lippman the attorney as its registered agent, based on a vote of the “members” of the corporation on May 22, 2012. The articles of incorporation for the fund, filed on July 19, 2011, establishing it as a “Florida not-for-profit” corporation are a little thin – just one page. The articles say the fund is “exclusively for charitable purposes that qualifies (sic) under IRC ss. 501(c)(3), including advocating for grandparents rights with regard to grandchildren and assisting grandparents of missing, neglected, or exploited grandchildren.”

If Casey Anthony received any money from the fund, it would violate Article VII in the amended articles of incorporation, filed August 2011, which disallowed any of the earnings of the fund to go “to its directors, officers, or other private persons, except that the Corporation shall be authorized and empowered to pay reasonable compensation for services rendered …”

Let’s set the timeline. Caylee’s Fund is created as a Florida not-for-profit July 2011. The interview with George and Cindy Anthony is shown on Dr. Phil’s TV show in three parts, beginning on September 13, 2011, followed by Part 2 on September 14 and Part 3 on September 19 .The trustees of Caylee’s Fund then vote to dissolve the entity in May of 2012, meaning that the charity was alive less than a calendar year. Presumably, if People magazine is correct, McGraw made a payment of $600,000 to the fund during the Fund’s brief 10-month lifespan. On the show, McGraw said that the Anthonys were not being paid for their appearance. The website for Caylee’s Fund is down.

Caylee’s Fund isn’t the first of the Anthony family’s charities. Another foundation with Cindy Anthony as the nominal contact, the Caylee Marie Anthony Foundation, is reportedly defunct, though it is listed by Guidestar as a 501(c)(3), albeit without a Form 990 posted and in the IRS Publication 78 as a (c)(3) public charity still legally available to receive tax deductible contributions. This foundation is widely believed to have been used to fund an “inmate commissary account” for Casey Anthony, an account from which an incarcerated person (as Casey was during her trial) can purchase clothing, soaps and shampoos, food stuffs and candy from the commissary provider in the jail. Caylee’s Fund doesn’t appear as a 501(c)(3) in Publication 78, which is the authoritative list of IRS-approved charities.

The Casey Anthony trial created a subculture that need not be revived here. But the brief and all too vague history of Caylee’s Fund as well as the other Caylee foundation creates an impression of a none too salutary charitable endeavor.—Rick Cohen