Why the Heck Should We Be Grateful? The Unseen Effects of Gratitude 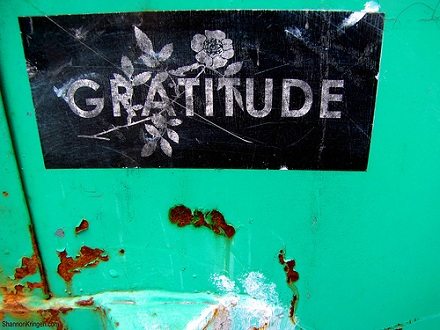 The social sector – possibly more than any other – is full of expressions of gratitude. We routinely thank our donors for their support, our volunteers for their time, and our boards for their guidance. They thank us for our hard work and for the opportunity to give back. Our constituents thank us for the services we provide and we thank them for inspiring and guiding us. Because “thank you” is a natural part of our everyday conversation, gratitude has historically been dismissed as simple, obvious, and unworthy of serious attention. Over the past several years, however, a number of researchers in the field of positive psychology have studied the effect that gratitude has on our well-being. Nonprofits may want to take note of these findings and some of the creative ways that gratitude is being cultivated and assessed.

Empirical studies have demonstrated that people who practice gratitude consistently report a number of benefits, including stronger immune systems, lower blood pressure, higher levels of positive emotions, greater control over their environments, and stronger interpersonal relationships. As a trait, gratitude may be explicitly directed toward someone who provides a valued gift or assistance, or gratitude can refer to a habitual appreciation of life’s positive aspects. It is this more generalized orientation toward life, independent of an exchange-based relationship that seems to be of particular interest to researchers.

In a recent essay, gratitude guru Robert Emmons argues that thankfulness is important not only because it helps people feel good, but also because it encourages them do good. “Gratitude takes us outside ourselves where we see ourselves as part of a larger, intricate network of sustaining relationships, relationships that are mutually reciprocal,” he writes. “As such, gratitude serves as a key link in the dynamic between receiving and giving. It is not only a response to kindnesses received, but it is also a motivator of future benevolent actions on the part of the recipient.” This “pay it forward” aspect of gratitude fosters the exchange of time, money, and attention in the service of social good.

The Greater Good Science Center at the University of California, Berkeley in collaboration with the University of California, Davis recently received a $5.9 million, three year grant from the John Templeton Foundation to expand the science and practice of gratitude. A cornerstone of this research is a project called Thnx4.org, an online gratitude journal and tool for gathering research data. Upon registration, participants are asked a series of survey questions. Each day for two weeks, users capture moments of thankfulness or being thanked, which they can share through Facebook, Twitter, or e-mail. Each time a user logs an entry, the system generates a gratitude-related tip such as, “Tracking gratitude is more effective if you make a genuine commitment to improve your attitude. Don’t just go through the motions – invest in yourself.” At the end of the challenge, users retake the self-survey.

Jeremy Adam Smith, Greater Good web editor, would love to see more people in the nonprofit sector participate in the Thnx4.org project. “In nonprofits, relationships are often more complex,” says Smith. “The people who work there are there to fulfill the mission of the organization. There might be economic motivations, but people always bring another motivation. In most nonprofits that rely on donations, gratitude is institutionalized. If you don’t get those thank you notes out, you’re not going to see those renewals. If you’re bad at saying thank you, that materially harms your work. The result is that gratitude can provide a number of critical beneficial effects at nonprofit workplaces.”

Gratitude in fewer than 140 Characters

“A lot of the ablest, best expressions of gratitude follow the rules of good writing,” says Smith. “You can acknowledge someone’s contribution by saying, ‘I like John because he is a good person,’ but what really you want to say is, ‘John is a good person because when he writes an article, he verifies everything and writes about people with kindness and compassion.’ That specificity is a sign of authenticity and not merely a ritualistic expression.”

It was out of a similar sense of acknowledgement and recognition that NTEN launched its member appreciation month several months ago. In addition to free webinars and prizes throughout the month of November, NTEN encourages members to express their gratitude toward other members by tweeting using the hashtag #NTENThanks. Twitter limits messages to 140 characters, so expressions of gratitude have to be concise. Even so, there have been more than 120 tweets so far this month, and the majority of them recognize specific activities of those who often go unrecognized, according to Amy Sample Ward, NTEN Membership Director. “Tweeting out to your networks the work of others is a simple, fun way to say ‘thank you’ and acknowledge contributions that often go unseen,” says Ward.

Trending heavily throughout the Twitterverse, #GivingTuesday offers an antidote to the excesses of the conspicuous consumption of Black Friday. A campaign to create a national day of giving on Tuesday, November 27, #GivingTuesday celebrates and encourages charitable activities that support nonprofit organizations. The campaign began as a project of New York’s 92nd Street Y, but has since grown to include more than 800 partners, from nonprofits to corporations, to celebrity spokespeople, to help spread the word.

For Indiegogo Founder Danae Ringelmann, a powerful way to thank someone or an organization is by raising money on their behalf through social networking. “We’ve seen hundreds of people raise money through their social networks in the wake of Superstorm Sandy,” says Ringelmann. On Indiegogo to date, nearly 150 campaigns have raised over $650,000 for dozens of organizations and people involved in Sandy relief efforts, from Red Cross to individual to families in need. “What’s powerful about crowdfunding is that people are not just donating online, but they’re using Indiegogo to harness their own networks to amplify fundraising; thus giving more money to relief efforts than they ever could on their own,” says Ringelmann.

Indiegogo recently partnered with MTV to support the online portion of their MTV Telethon to raise money for Architecture for Humanity’s rebuilding efforts in New Jersey. To express their gratitude, cast members of “Jersey Shore” called funders back directly. “I love the personalization, transparency, and specificity so many of the Sandy relief effort campaigns have integrated into their perks,” says Ringelmann. “For example, 4-year old E started a campaign to raise money for Sandy relief efforts by giving up his entire piggy bank. As a thank you to others who do the same, he’ll draw them a personalized picture.”

Gratitude, it seems, is both the by-product of social sector work and the bounty of it. It is the gravy that covers and flavors everything that we in the nonprofit sector do. Given the role that gratitude plays in our industry and in our lives, we who spend our days in sometimes seemingly thankless jobs may want to carve out a bit of extra time this holiday season to imbue, serve, and savor generous portions of thankfulness.

John Hoffman is director of business development at ZeroDivide, a San Francisco-based nonprofit organization. He has more than 15 years of experience in marketing and development within the high-tech and nonprofit sectors.