Why Was Occupy Wall Street Being Occupy Sandy? 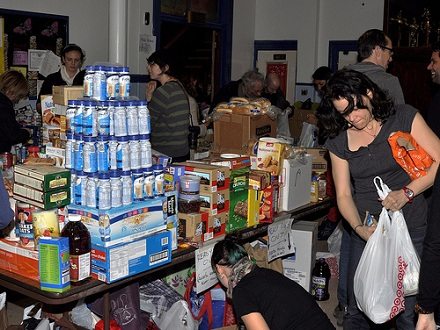 “They forgot about us,” one resident told the Voice. “We’re like on some other planet.”

The stories about Occupy Wall Street participants declaring themselves Occupy Sandy disaster responders could be seen as proof of Occupy’s lack of focus, but according to the Village Voice, this is far from the case. In fact, Occupy was competing with no one and nothing as it mobilized to provide relief services and supplies to the hard hit areas of Red Hook and the Rockaways. FEMA made itself so scarce it created a vacuum into which all sorts of insults and injuries were added to the original storm damage.

The Voice article describes the scene in the Rockaways “where the storm surge rushed clear over the island, pushing beaches into homes and roadways, knocking out power, and filling every basement, storefront, and vehicle with saltwater.” On the Rockaway spit [?], 80 homes were destroyed by fire and high-rise apartment buildings sit dark. Residents tell the Voice that for some days following the hurricane, men were “knocking on apartment doors and announcing themselves as FEMA.” But according to a resident of Bay Towers, “Once you crack the door, they push in on you, come into your apartment, steal everything you’ve got.”

The news that disaster response efforts are not always fair, especially to marginalized communities, is not new in the least. A network of dedicated volunteers may not have all the resources that should have been brought to bear to relieve the devastation that was wreaked on these communities but they did what they could in response to immediate need and highlighted institutional failure at the same time. A valuable service.

Some resident of areas in the far eastern reaches of Rockaway reported that the Occupy Sandy folk, working on their basic improvisational theme, were the only people to ask people exactly what they needed and if they knew of others who required immediate attention.

They were not completely alone.

According to the Village Voice, “Community centers opened kitchens and distributed batteries. New York’s Sikh Cultural Society set up an extensive relief station in Rockaway Beach near the foot of the Cross Bay Bridge, handing out food and blankets under a banner emblazoned with the serene face of Guru Nanak.”

Occupy Sandy, the article is quick to say, cannot and should not compete with the resources and tools of big, well funded relief efforts, but their efforts brought immediate comfort and safety, as well as media attention to the excruciating slowness of the response to people in communities that were among the hardest hit. –Ruth McCambridge