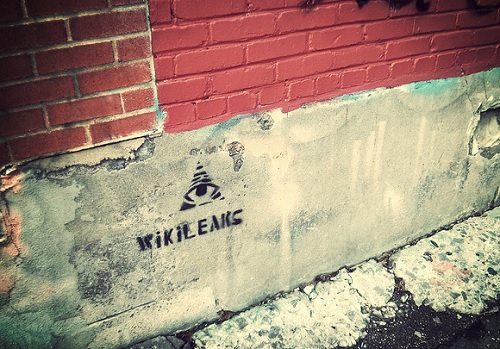 How interesting! In top political circles, Julian Assange is viewed right up there with Edward Snowden and Chelsea Manning as a violator of the Espionage Act (though Assange, as a foreign national, doesn’t quite fit the bill). How many American politicians have called for his indictment and conviction for an assortment of crimes associated with the ability of Wikileaks to obtain otherwise secret U.S. government documents, including Manning’s information, and post them online for the world to see?

This past week, we found Wikileaks in cahoots with another well known enemy of government secrecy, the Gray Lady itself, the New York Times, together revealing secret drafts of the Trans-Pacific Partnership (TPP), the free trade pact that President Obama has been negotiating without much or, actually, any transparency as to what the U.S. government and the other potential signatories were putting onto paper.

The New York Times story, bylined by Jonathan Weisman, discusses the actual provisions of what others have suggested would likely be in the treaty, the ability of private corporations to sue the participating governments “for actions that undermine their investment ‘expectations’ and hurt their business.”

The truly surprising part of the story isn’t the ability of disappointed corporations to sue over frustrated investment possibilities. It’s that the draft of the chapter, dated January 20, 2015, was marked, according to Weisman, as “not [to] be declassified until four years after the Trans-Pacific Partnership comes into force or trade negotiations end, should the agreement fail.” That’s a great definition of secrecy, at odds with the first of poor Woodrow Wilson’s fourteen points: There should be “no private understandings of any kind, but diplomacy shall proceed always frankly and in the public view.” In the case of the TPP, it increasingly seems to be a private deal made for the benefit of private corporate interests to be kept secret from the public long after the pact is consummated.

How did Wikileaks come up with this 56-page “Investment” section of the treaty? We don’t know. Maybe it was someone from one of the nations that is less gung-ho about the corporate litigation powers than the U.S. (for example, Australia, which seems to be pushing back against some corporate power provisions). Weisman’s article highlights the ability of foreign corporations to sue the U.S. for their disappointing investment expectations, but we noted in our piece that the bigger problem is, perhaps, foreign countries without the legal and financial power of the U.S. getting sued. Perhaps someone from one of the smaller, weaker nations in the TPP decided to help out Wikileaks with the information.

Regardless of how Wikileaks got the document, do recognize, as the New York Times clearly has, that the ability of an NGO like Wikileaks to obtain and reveal this kind of information is a huge benefit to political discourse. For the moment, on the issue of the TPP’s investment provisions, the Obama administration has to face up to critics—perhaps, as Weisman noted, from both the left and the right—who will now be able to talk about specific TPP language rather than guessing at the treaty’s contents.

Next, we can only hope that Wikileaks finds itself in possession of the chapters on labor and on the environment. If U.S. nonprofits are not yet fully engaged in the TPP/fast-track issue with the investment chapter, those chapters should light a big spark leading to a vigorous public debate.—Rick Cohen