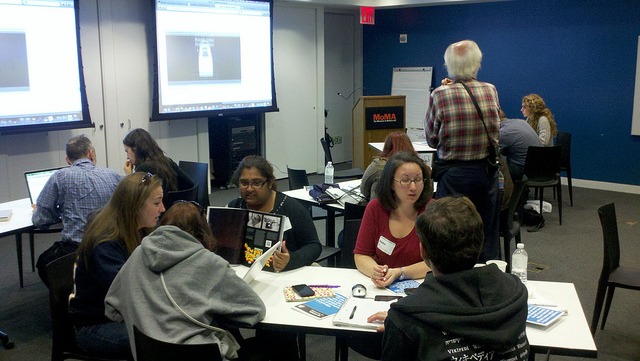 It was a few years ago, in an interview NPQ did with Anasuya Sengupta, then of the Wikimedia Foundation, that we heard about Wikipedia’s strategies for so-called “GLAM institutions”—galleries, libraries, archives, and museums. The initiative is designed to help cultural institutions share their resources widely through a variety of kinds of collaborative projects with experienced Wikipedia editors. Some models of such projects can be viewed here.

One of these tech-savvy GLAM institutions is New York’s Museum of Modern Art (MoMA), which has invested in making the best use of Wikipedia, embedding links from the site on its artists’ pages and hosting volunteer trainings to facilitate the updating of entries about the MoMA collection. One recent training, focused on Latin American art and culture, included scholars, educators, marketers, bankers and engineers.

“We’re recognizing other people can contribute knowledge,” said Fiona Romero, director of digital content and strategy for the museum.

But although Wikipedia does caution against conflicts of interest in the writing of entries, staff become involved too, like art historian and curator Alexandra Thom, who spent nearly a year writing 24 articles and editing another 18 to fill in the gaps on Wikipedia’s African art and culture content, an area she believed to have been portrayed negatively in Wikipedia.

“I love Wikipedia for providing a seemingly endless web of linked information that I can follow from one article to the next,” said Thom. “In terms of the bigger picture and this project in particular, Wikipedia fascinates me for its ability to attract an enormous amount of attention from readers around the world.”

Librarians from the Metropolitan Museum of Art also have been working to add bibliographic citations to articles. William Blueher, the metadata and collections librarian in the Met’s Thomas J. Watson Library, said that the activity has caused the museum’s Web traffic to increase tenfold between 2012 and 2014.—Ruth McCambridge