Will a WPA-like Art Project Boost the Green New Deal? 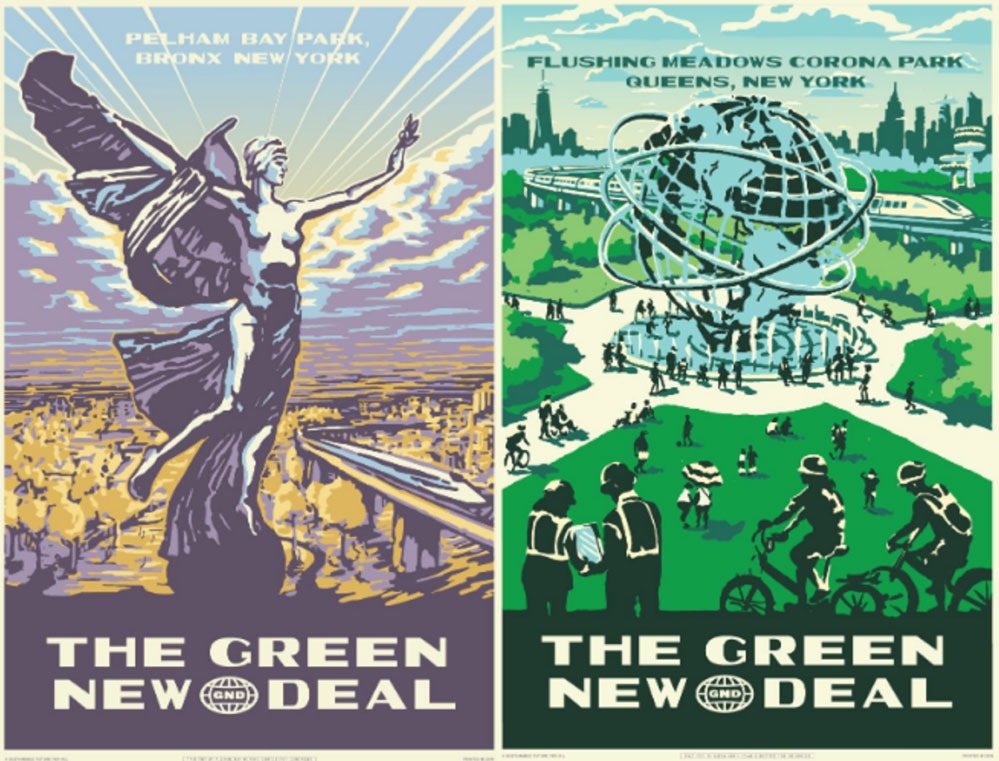 Over Labor Day weekend, Congresswoman Alexandria Ocasio-Cortez, a strong supporter of the Green New Deal (GND) movement, introduced the first two posters in a series of images (and other products) aimed at promoting the GND. The artwork echoes—both visually and philosophically—now-famous lithographs created by artists in the 1930s and ’40s through one initiative of the Works Progress Administration (WPA), introduced by President Franklin Delano Roosevelt to help Americans cope in the years following the Great Depression.

Ocasio-Cortez, who represents the 14th district of New York, highlighted posters that feature what she described on Twitter as “two of our beloved NY-14 parks: Pelham Bay and Flushing Meadows.” She added, “All our #GND posters are made in the US, union-printed, and will be available for purchase soon, but [are] available at organizing events now.”

As reported in Hyperallergic, Ocasio-Cortez noted that while the posters released over Labor Day weekend highlight monuments in the Bronx and Queens, GND proponents expect the collection to grow and to represent communities across America.

An article by Lisa Freidman in the New York Times earlier this year explained the GND, a complex set of ideas and goals, in some detail and offered helpful summaries of the objectives, as well as the name, behind the movement:

The goal of the Green New Deal is to reduce greenhouse gas emissions in order to avoid the worst consequences of climate change while also trying to fix societal problems like economic inequality and racial injustice….

The Green New Deal takes its name and inspiration from the major government makeover, known as the New Deal, launched by President Franklin D. Roosevelt to help the United States recover from the Great Depression. That series of public-works programs and financial reforms included the Civilian Conservation Corps (which put people to work in manual labor jobs like planting trees and constructing park trails) and the creation of the Public Works Administration to work on the construction of bridges, dams, schools and more.

Back in February, the Times suggested that though implementing the GND was technically possible, its political feasibility was quite another matter. However, while the GND addresses a different set of environmental challenges—many of which could not have been anticipated during the New Deal era—its conceptual links to a need for larger financial reforms, infrastructure improvements, and finding meaningful work for 21st-century Americans shut out of the present labor market are apparent.

What’s strikingly different is how the GND posters are being developed—not by artists receiving stipends from the government, as with the WPA, and the program later known as the Federal Art Project, but rather by Tandem, a “strategic communication and branding firm” (which undoubtedly employs artists). An article on Muse by Clio, a website focused on creativity, explains why GND champions might want to tie their movement’s image to those old posters:

Between 1936 and 1943, over 2,000 unique posters were designed and printed by the Federal Art Project within the WPA. They announced events and exhibitions, informed viewers about the value of public health and education, and, most memorably, celebrated the country’s National Park System. Tandem, the NYC firm behind the new posters (which also branded AOC’s successful 2018 congressional primary campaign), did well to choose these images as inspiration, as they are considered by most poster historians to be a highpoint in American poster output, and are some of the most rare and beloved by collectors. More importantly, they represent one of the first moments when the US government supported the arts on a national scale, and actively pushed citizens overwhelmed by the Depression into a brighter economic future.

It is perhaps too much to expect that the US government will—in the foreseeable future—make considerable new investments in supporting the arts. But might the arts (artists, creatives, designers, even branding agencies) help to move the needle on the GND and help to educate the public about the potential for a 21st-century “brighter economic future”?—Eileen Cunniffe