Will the Chicago Strike Elevate the Education Funding Debate? 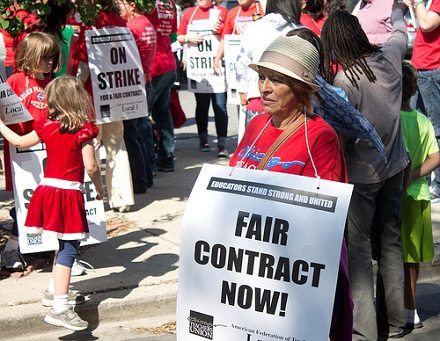 Yesterday, Chicago teachers went on strike. Some schools are remaining open with the use of non-union personnel, but nonprofits and churches are being forced to gin up programs for kids left without school-day options in a city that has been plagued by an increase in youth crime. Too many nonprofits will watch this as a battle between the teachers’ unions—constantly vilified in the press (and sometimes by nonprofits) as interested in protecting teachers jobs and not giving a fig for students—and public sector leaders such as Chicago Democratic Mayor Rahm Emanuel. Emanuel will likely get increasing support from people who believe that the unions are all but intractable. But a recent review of budget documents from 48 states by the Center for Budget and Policy Priorities reveals that Illinois is one of a handful of states that has cut per-pupil funding more than 10 percent since 2008.

It isn’t often that we can see a decent tabulation of state spending on one subject across all 50 states (or, at least, almost all of them), but that is what the Center for Budget and Policy Priorities has produced and it finds that almost three-fourths of those states have budgeted to spend less for elementary and high school education in the 2012-2013 school year than they did in 2008. That doesn’t mean that all K-12 funding is lower, since state aid accounts for roughly half of education funding. However, federal aid to education in the wake of the end of the stimulus has plummeted and local government funding, dependent on property tax revenues, is hardly robust in the wake of the nation’s tanking housing markets due to the foreclosure crisis.

As summarized by Stateline, “States with the deepest long-term cuts include Arizona, Alabama and Oklahoma, where per-pupil funding was down more than 20 percent since 2008. Schools in Idaho, South Carolina, California, Georgia, Wisconsin, North Carolina, South Dakota, Kansas, Mississippi, Oregon, Illinois, Texas and New Mexico sustained cuts of more than 10 percent over the same period.” Notably, most of the states in which K-12 education funding grew were the states with burgeoning revenues due to oil and gas drilling and the distribution of industrial operations.

What does this mean for nonprofits? In a way, it’s more of the same: more pressure on nonprofits to design and deliver educational programs supplementing public education and more debate within public education systems as to whether privately managed charter schools are siphoning resources from traditional public schools. Perhaps, it may also mean renewed attention to the issue of education tax credits for private schools taking needed state resources away from the K-12 systems that depend on state and local government revenues and more teachers on the streets—with those remaining dealing with larger class sizes, declining educational performance, and more demand for youth services from nonprofits that deal with kids not getting what they need in schools.

Maybe nonprofits can use the advent of picket lines at schools in Chicago to elevate the discussion from the trope that the teachers’ unions are the problem to an analysis of the fiscal constraints that are raining on public school systems and what has to be done to stabilize and strengthen public education. How can nonprofits contribute to such a process than chipping away at the great and distinctive American edifice of “common schooling?” —Rick Cohen