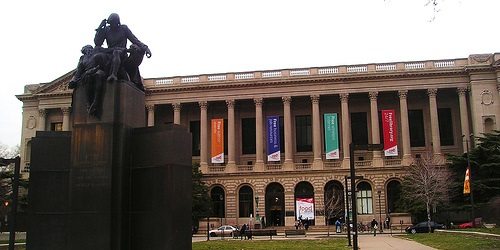 Noting that more than half the population of Philadelphia uses the city’s 54-branch library system, the William Penn Foundation has announced a three-year, $25-million “transformative” grant to the 120-year-old Free Library of Philadelphia to support renovations at the Central Library on the Benjamin Franklin Parkway and at five branches throughout the city. The grant—which, importantly, represents an estimated eight percent of the foundation’s giving budget over the next three years—is the largest single grant ever made by the Philadelphia-based philanthropic institution and the largest ever received by the Free Library.

The grant will go a long way toward allowing the city-wide library system to realize its strategic plans, which include $28.5 million in renovations at the Central Library and a $30 million project to develop five “prototype” branches that will deliver services aligned with the unique needs of their diverse neighborhoods. The William Penn gift is also intended to spur gifts from other philanthropic sources, engaging donors in the process of fulfilling a campaign known as “Building Inspiration: 21st-Century Libraries.” The city, the state of Pennsylvania and private donors have already made significant commitments toward the renovation of the five neighborhood branches, with about $5 million still to be raised. An additional $10 million is needed for the renovations at the Central Library.

Among the physical renovations that will be made at the Central Library will be a flexible, 8000-square-foot lobby-like space on the first floor that will eventually—when sufficient funds are raised—lead into an annex on a nearby plot of land. (That $90-million annex is still a dream, although design work has begun.) Below the new first level space, which is being called “the common,” will be a center dedicated to business building and career assistance.

Free Library president and director Siobhan Reardon noted that the William Penn grant will support building renovations that will allow the institution to continue to manifest a shift in mission that focuses on services for job seekers, pre-K children, entrepreneurs and small-business owners, new Americans, people with disabilities and consumers of medical and health-care information.

Earlier this year, NPQ reported on an innovative program at the Central Library that combines literacy with culinary skills and nutritional education. Also included in the library’s long-term plans is an Innovation Fund to test new programs and services and to increase involvement with the city’s chronically underfunded school system.

New William Penn Foundation executive director Laura Sparks emphasized the importance of the library system to the life of the city, especially with schools and churches closing and community needs—including those of immigrants and job seekers—continuing to increase.—Eileen Cunniffe