Can Humanitarian Aid to Refugees Address Worsening Conditions in Iraq? 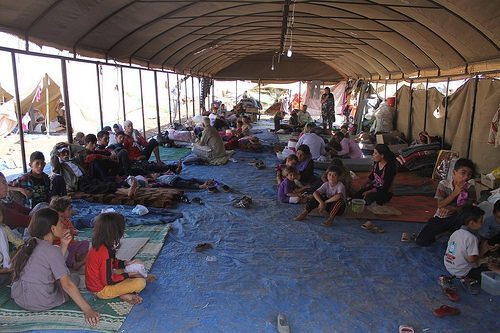 The Obama administration made a big show of airdrops of humanitarian relief to the Yazidis, members of a small religious sect, trapped on Mount Sinjar in northern Iraq by the advance of genocidal ISIS troops. Though there has been some question of the numbers and conditions of Yazidis on the mountain, that debate is beside the point; Yazidis there and in their villages are in danger, as demonstrated by the recent ISIS attack on the village of Kocho, where as many as 80 men were killed for their unwillingness to convert to Islam.

Lost in the focus on the critical issues facing the isolated Yazidis are the much larger dimensions of the humanitarian aid crisis in Iraq—both since the emergence and advance of ISIS militants and before ISIS overran much of the country—and the huge challenge facing aid organizations on the ground:

Aside from the aid drops from U.S. and British aircraft, how are humanitarian aid groups responding? The Voice of America reports that the United Nations High Commissioner for Refugees (the UN’s refugee assistance agency) and the World Health Organization are increasing their provision of aid. WHO, for example, is increasing its provision of medicine to refugees and deploying nurses and mobile health clinics in the Dohuk region.

Some more aid gets in through religious and secular NGOs. With the serious threats to Christian populations in Iraq, a number of Catholic NGOs have stepped up their aid efforts, including Aid to the Church in Need—USA, Caritas, Catholic Relief Services, and the Catholic Near East Welfare Association, just to name a few. But the dimensions of the humanitarian crisis in Iraq aren’t just Christians and Yazidis, but a larger population of people in need.

In this telling, the humanitarian issue in Iraq may seem largely sectarian. The reality is much different. Huge swaths of the nation have been displaced and placed in dire need. Whether or not the U.S. might have bear some responsibility for all of this with its ill-considered invasion of Iraq in 2003, the nation and its associated foundations and charities have yet to craft a humanitarian aid strategy commensurate with Iraq’s current needs, which will only be exacerbated going forward.—Rick Cohen