XPRIZE to Solve Illiteracy Described Modestly as “Next Moonshot” 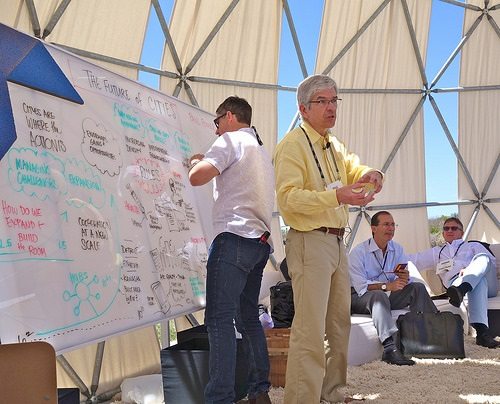 Kelli Rogers of Devex touts XPRIZE as located at the “intersection between audacious and achievable.” It is a neat turn of phrase, but what does it mean about what XPRIZE actually does?

The XPRIZE Foundation, according to Keller, “designs and manages incentivized public competitions intended to encourage technological development and accelerate the rate of positive change.” It just announced the Global Learning XPRIZE to develop open source software that can be used in developing countries for children to teach themselves basic reading, writing, and arithmetic. The prize to the winner is $15 million.

There is no modesty in the XPRIZE approach. Its announcement of the Global Learning competition was described as the organization’s “next moonshot: bringing literacy to 250 million children around the world.” The audacious part of this, according to XPRIZE’s Matt Keller, is whether it is even possible for children to teach themselves to read through software. XPRIZE believes that even if no one does win the $15 million, they and other competitors will have invested substantial funds into the problem of illiteracy in developing countries.

For the past decade, XPRIZE has been fueling the competitive juices of entrepreneurs to solve the world’s problems. “People love to compete; they want to win,” Keller explains. To operate these competitions, the XPRIZE Foundation gets support from an eclectic array of donors, including these: the Dick & Betsy DeVos Foundation (Dick DeVos ran Amway and is known as politically very conservative), Scott Hassan (software architect and developer of Google and the Stanford Digital Library), the Anthony Robbins Foundation (Robbins is the television-famous self-improvement trainer), and the Merkin Family Foundation (Richard Merkin is the developer of large physician-owned and –operated integrated health services delivery systems). The major XPRIZE donors are, for the most part, living donors with track records as entrepreneurs, inventors, and, like Robbins, motivational speakers.

XPRIZE’s fame comes from a number of sources, but particularly the prize it gave 10 years ago for the first privately financed and designed spaceships (SpaceShipOne, financed by Microsoft co-founder Paul Allen) and subsequent awards such as super-efficient cars capable of 100 mpg performance and oil cleanup on ocean waters. Future prizes planned by XPRIZE will address no-soil agriculture, clean drinking water, urban farming, earthquake prediction, and, notably, “democracy”—to address an accurate, verifiable, scalable voting technology. XPRIZE is determining which of these future themes it might pursue by virtue of crowdsourcing, much like its approach to generating teams to compete for its prizes.

Does the technique work? SpaceShipOne, for example, was retired after a couple of trips piercing the 62-mile boundary that is the beginning of space. However, cleanups of oil spills have used the technology generated by the XPRIZE competition. Overall, XPRIZE seems to be about reducing societal challenges to technological solutions. The problem is anticipating those challenges. Would that XPRIZE’s process had led to a prize for a vaccine and treatment for Ebola, or a mechanism to prevent the starvation of millions of displaced Syrian refugees, or a means of finding a lost aircraft in the Indian Ocean whose black box has gone silent.—Rick Cohen