Yoga as a Conspiracy to Convert our Kids 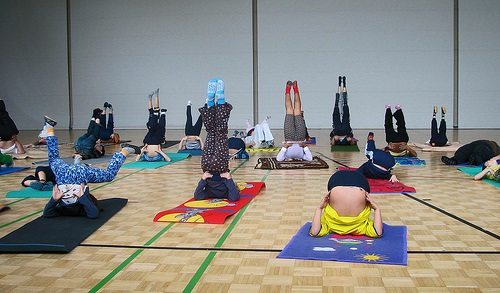 Who could predict that when Albuquerque elementary school teacher Ann Paulls-Neal presented in front of a legislative study committee about student health and childhood obesity, she would incite such a firestorm of concern?

Paulls-Neal described the stretching exercises she has her students do, saying that she is careful not to refer to them as “yoga” because of any potential worry about the inculcation of religion. But this caught the attention of Rep. Alonzo Baldonado (R-NM), and the Republican state legislator has expressed concern about having children do mat excercises in school, saying that parents should be notified and given the opt-out option because yoga is linked to Eastern religions.

“Are we teaching yoga in public schools now?” he asked. “Are parents notified?”

Baldonado’s children are homeschooled, so they are in no imminent danger, and he said said he has nothing against Buddhism or Hinduism, but that yoga could be viewed as a gateway to Eastern religion. “We have the authority, the charge from God,” he said,” to raise our children as we see fit.”

Patrick Davis of the nonprofit ProgressNowNM commented, “Of all the things a legislator could focus on to get our public schools back on track, Rep. Baldonado chose this one as his most important…Even for conspiracy theorists, this one seems far-fetched. How he thinks a rudimentary stretching routine meant to improve physical health could lead students to join a religious cult is beyond me.”

But Baldonado stands by his expressed concern, saying that it it is line with the requirement of separation of church and state and general opposition to prayer in public schools.—Ruth McCambridge