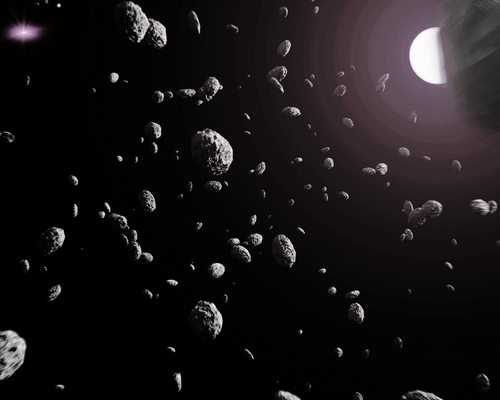 Who says government isn’t creative, innovative, inventive, and far-sighted? Have you read about President Barack Obama’s offer to commit $100 million for the National Aeronautics and Space Agency (NASA) to “lasso” an asteroid, drag it next to the moon (Earth’s moon, that is), and send a team of astronauts in an Orion space capsule to it for an asteroid walkabout? The corralling of the wild-stallion asteroid would be done by 2019, and the four-person astronaut asteroid-walk would be by 2021.

The announcement apparently came from Florida senator Bill Nelson, who himself has been attentive to concerns that an asteroid might hit the Earth. Perhaps for economic value, the Obama plan might include some asteroid-based mining activities, but the subtext may be to understand how to avoid having an asteroid smack into Earth. Think of Robert Duvall, Téa Leoni, Vanessa Redgrave, and President Morgan Freeman to save Earth from an asteroid hit in 1998’s Deep Impact, or Sean Connery investigating a mining colony on Jupiter’s Io moon in 1981’s Outland.

The asteroid line item is apparently in President Obama’s yet-to-be-released FY2014 budget proposal, so it might be that the public discussion of it prompted by Senator Nelson might be a way of gauging public reaction to see if it should stay in or be deleted from the final budget. This would, however, provide a use to the investment that has already been made through NASA in the “Space Launch System” (SLS), the heavy-lift launch vehicle that would send the new Orion Multi-Purpose Crew Vehicle, replacing the now-disbanded space shuttles, to the asteroid and beyond. Nelson, a Democrat from the state of Cape Canaveral, and Texan senator Kay Bailey Hutchinson, a Republican who hails from the state housing the Lyndon B. Johnson Space Center (think “Mission Control”), both fought long and hard for the SLS.

At least President Obama isn’t talking yet about setting up a space colony on the asteroid, like candidate Newt Gingrich did for its moon neighbor. But his proposal does appeal to nonprofits that are concerned about the danger of asteroids. The Blaze quotes Rusty Schweickart, himself a former astronaut and chair emeritus of a nonprofit called the B612 Foundation, suggesting that the asteroid-lassoing plan “would be great fun,” as well as useful for planetary defense. The last five years of the nonprofit’s Form 990s show that it raised a total of $175,146 toward its mission of building and launching a privately funded deep space telescope to orbit around the sun to spot and ward off troublesome asteroids.

The president’s plan should give a shot in the arm if not a boost to the fundraising for nonprofits like the Association of Space Explorers, the professional association of astronauts and cosmonauts who have actually been in space, and the Planetary Society, founded by the iconic astronomer Carl Sagan and now run by Bill Nye, “the Science Guy.” But within a budget that is being hammered by pressures from the deficit and sequestration, does it make sense to put $100 million toward capturing an asteroid, especially when it has to be apparent that the ultimate cost would dwarf that allocation?

As for the name of Schweickart’s foundation, B612? It takes its name from the asteroid home of The Little Prince, one of the greatest books ever written. Antoine de Saint-Exupéry’s children’s fantasy was full of meaning for daily life, for children and their parents. Will President Obama’s $100 million asteroid plan be anywhere near as meaningful as that lovely book? –Rick Cohen