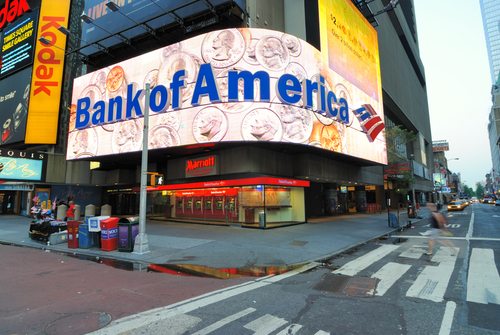 Did the 99% Power protests at the Bank of America shareholders’ meeting hit their mark? Bank of America is still there, and the corporate managers got their way on major initiatives, but the 99% Power movement still had an impact. Fundamentally, the protests have made shareholders’ meetings and the content of their agendas more visible to the American public, particularly in terms of how their private corporate decisions have significant public impacts.

Despite the decision of the Charlotte, N.C. City Council to classify the protests as an “extraordinary event,” thereby allowing for the criminalizing of typically legal protest activities, some 1,000 protesters showed up to rally outside—and for a few, inside—the Bank of America’s shareholder meetings, raising questions about BofA’s role in financing mountaintop coal removal and foreclosing on millions of homeowners. For the most part, inside the meeting, protesters raised questions that the BofA execs parried and dismissed as briefly as they could.

More important, however, was the attention given to shareholder resolutions. Although BofA fended them off, too, they were visible and covered in the mainstream as well as the business press. Although the bank’s management compensation plan (which delivered a $7 million package to the already well compensated CEO Brian Moynihan) was approved by a vote of 92 percent of the shareholders, BofA had to face requests for third-party audits of the bank’s mortgage servicing operations (which BofA fought off with a vote of 85 percent of the shareholders) and a call for more disclosure of the bank’s lobbying operations (which got the support of 30 percent of shareholders).

“Why do these people even bother showing up,” said an older woman of the 99% Power protesters on her way into the shareholders’ meeting. “Nothing is going to change for them.” She was wrong. The private nature of the corporate shareholder meeting is changing. Recent votes affirming management’s decision-making seem to be weakening under the pressure of people infiltrating venues such as BofA’s annual meeting in Charlotte. –Rick Cohen