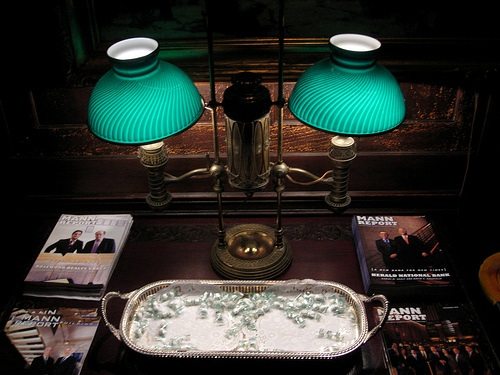 Where is Dominick Dunne when you need him? This story, about a suit brought by the New York Attorney General against the former president of the National Arts Club, is worthy of a long article in Harpers. O. Aldon James headed the prestigious club in Gramercy Park for 25 years, and the story is chock-full of accusations of bullying, animal cruelty (abandoned finches), compulsive hoarding (of stuff bought at flea markets with club credit cards and checks that filled seven apartments and various offices in the club), and gross financial self-dealing. Furthermore, there is a twin brother.

After spending $1 million on legal fees in a series of suits and countersuits, O. Aldon James Jr. has settled the suit against him for $950,000. He, his twin brother, John, and a family friend have agreed to move out of the apartments they inhabited in the club’s residence tower by the end of July. They also agreed that they would not ever again serve as officers or directors of a nonprofit organization in New York.

A longer article that’s well worth reading discusses the fact that O. Aldon had built the membership and financial stability of the club significantly over his tenure, but points out that the attorney general is not the only one who thinks he and his brother and friend were out of line. The article cites a previous case involving O. Aldon, John, and the club’s dining room operator. All three pled guilty to tax evasion, and John James was ordered to cough up $500,000 in fines and restitution and spend three months in a psychiatric facility for using the club’s tax exemption to buy and sell jewelry.

The other club members are not of a mind and the dispute has caused deep divisions. Ted Andrews is a member of the group pursuing the ouster and, in his opinion, “Aldon James and his group created a mini-communist state there, with portraits and busts of him everywhere…If you were friends with Aldon, things went smoothly, and if you weren’t friends, there was a lot of direct and indirect social pressure put on you. I was put off the admissions committee; I felt pressure from other club members. He controlled people’s lives to some extent because he controlled the apartments in the building. Control was his middle name.”

But Laurence S. Cutler, the chairman and founder of the National Museum of American Illustration in Newport, R.I., and a member of two decades, says of the current president, “Dianne Bernhard is a cultural fraud…If you look at her art, it’s the kind of stuff you see on velvet. I could never understand how Aldon could have this vacuous woman at his side, and then she turned out to be Brutus.”

When another member started trying to clear out some of the rooms in which the hoarding had occurred, she came across not only uncashed rent checks and donations, but romantic letters between O. Aldon and some potential benefactors of the club.

And finally, in September of last year, according to this article, “members returned to a club transformed: new leopard-print rugs in the parlors, tiger-striped upholstery on couches, turquoise suede on the dining room chairs. A Tiffany fountain was replaced by a large mirror.” The renovations prompted a former board member to comment that it looked like a brothel.

But resident and member Esther R. Dyer thinks that O. Aldon’s faults are outweighed by his contributions to the club. “There’s a way to do transition that honors the past,” she said. “I don’t believe you need to destroy the person who built the club.”—Ruth McCambridge