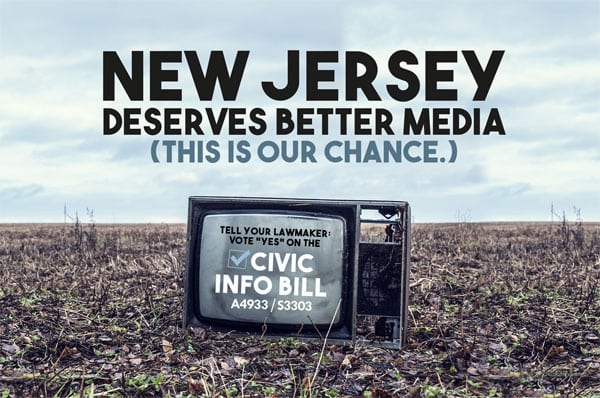 Once the funding is secured, the College of New Jersey, Montclair State University, New Jersey Institute of Technology, Rowan University, and Rutgers University will administer grants the newly formed nonprofit Consortium would award “to groups proposing ways to bolster local news coverage in the state.” The legislation states that the grantees “shall be independent from the influence of the State, a member university, and any other grantor or contributor of funds or outside source” and that the grants cannot “dictate or influence the content of any work the grantee produces or may produce.”

The governor, the leaders of the state Assembly and Senate, and the five colleges and university partners would appoint the Consortium’s 13-member board. This new nonprofit grantmaking organization would be the first of its kind in the nation and have its own staff to manage the fund. The Consortium would raise financial support going forward. The Consortium’s mission would be to meet the information needs of New Jersey residents, especially for those living in underserved communities.

By all indications, Murphy and state lawmakers remain committed to this local-journalism initiative, which is intended to help fill the void created by newspaper cutbacks and other media struggles that have left many communities in New Jersey with little to no local news coverage.

NJ Spotlight, the source for this story, is itself an award-winning New Jersey news website that was founded “to fill the vacuum created when the business model for conventional journalism collapsed.” The Consortium also matters greatly to the Free Press Action Fund, which proposed the creation of the Consortium in 2017 and then proceeded to generate the necessary public support that managed to move the project to this point. Sixty organizations signed this Free Press Action Fund letter of support.

New Jersey residents lose out when they can’t get information about their communities. And the state’s civic information ecosystem is at a critical juncture. Valuable legacy operations have endured major cutbacks, and some are on the verge of collapse. It’s also a moment when some promising local experiments might crash or soar. In either context, investments from the New Jersey Civic Information Consortium, supporting some of the state’s brightest minds in academia, media, innovation, and community service, could be the difference between success and failure.

Local and regional papers inform national ones. Advocates from across the country support the Consortium, including the Philadelphia Inquirer:

Nonprofit journalism is of ongoing interest to NPQ. The $5 million seed funding being sought by the state is not significant, but there is no guarantee that the newly formed Consortium will raise the serious dollars needed to sustain the effort to fill the state’s news void. Nevertheless, the concept is anything but modest. The Free Press Action Fund is to be commended for seeing the opportunity and then creating the groundswell of necessary support to inspire, if not force, government attention and then action, faltering as it might be. The state legislature is still writing this story, but the energy driving this innovative initiative is only building in strength.—Jim Schaffer