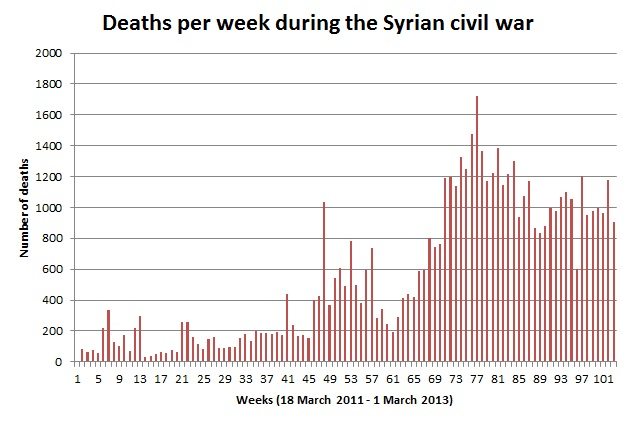 NPQ has repeatedly discussed the increasing role of human rights groups in reporting the news. By now, most observers know that it was Doctors Without Borders that confirmed the use of chemical weapons last week by noting the numbers of patients seen with neurotoxic symptoms in the three hours following the alleged attack on August 21st. Now, the Syrian Observatory for Human Rights has provided estimates for the number of deaths related to the two-and-a-half-year conflict. The number stands at more than 110,000, according to the group, which traced the information through networks of activists. More than half of those were civilians, and at least 5,833 were children. It counted only 500 victims of the gas attack in the suburbs of Damascus, compared with Washington’s figure of more than 1,400.

The Observatory documents information through acquiring film and photographs of bodies and by confirming identities with family, medics, and activists.—Ruth McCambridge

SUGGESTED ARTICLE: Leaders of Dream Defenders and DREAMers Bumped from #50MOW Line-Up at Last Moment: Why?