Advocates Must Retool for an Overwhelmingly Republican Landscape

As most nonprofits and philanthropies are aware, the GOP surprised most pundits and pollsters by retaining control of the U.S. Senate, albeit after a probable loss of two seats. Louisiana’s senate race is headed to a runoff, so Republicans will have either 51 or 52 seats, Democrats will have either 46 or 47, plus two independents who caucus with the Democrats. On the House side, the 30-seat majority held by Republicans was reduced by six, a far cry from the cautious hope expressed two weeks before the election that Democrats might win back the majority. 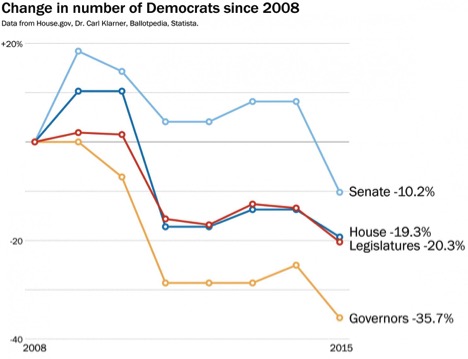 Republicans increased their share of governorships from 31 to 33, a record two-thirds of the 50 states. This represents a 36 percent decline in the number of governorships held by Democrats since 2008. State legislatures have 20 percent fewer Democrats than they did in 2008, and the GOP controls both houses of the state legislature in more than 20 states; Democrats control fewer than 10 state legislatures. Philip Bump writes for the Washington Post that in the past eight years “the [Democratic] party has shed 870 legislators and leaders at the state and federal levels—and that estimate may be on the low side.”

We need to say that the reported data do not include changes at the local level. Mayors, city councils, school boards, and other local elected and appointed positions often provide the testing grounds for candidates who political parties call on for more significant leadership roles. How these positions are apportioned based on party and ideology may be a strong indicator of how the Congress and statehouses are composed in the next decade or two.

NPQ has outlined steps nonprofit organizations must take to prepare for the Donald Trump presidency that begins in January. For those who identify the nonprofit sector with progressivism and identify progressivism with the Democratic Party, it’s crucial to understand that the advocacy job for nonprofit causes and organizations is larger and more diverse than the White House or even the federal government. Despite its flaws and factional infighting, despite its having a seriously flawed presidential candidate, and despite oceans of GOP-targeted political spending failing to materialize, the Republican Party is in the governmental leadership majority both in Washington and across the country.

This fact means that the advocacy challenge is broader and more intense, that it must be pursued on multiple fronts, and that it may be necessary to reframe arguments to persuade executive and legislative leaders unfamiliar with—or hostile to—current rhetoric and strategies used by many charitable organizations and nonprofit advocacy causes.—Michael Wyland