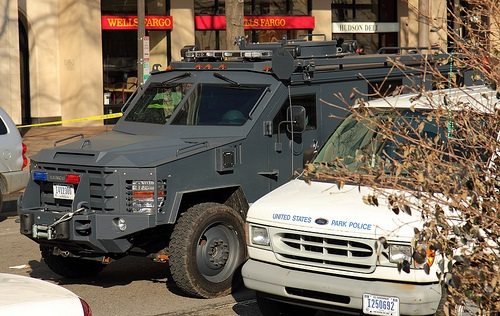 Although he will be out of office in a couple of weeks, Attorney General Eric Holder is trying to follow through on his post-Ferguson commitment to address the nation’s deteriorating police-community relations. Last week, for example, he went to San Francisco to join Mayor Ed Lee and some invited local youth at the Willie Mays Boys & Girls Club to address the lack of trust in the black community toward police. Participating in the meeting were also police cadets who help out at the facility in Hunters Point as part of their training.

Before going across the Bay, Holder had been in Oakland for the last of his six planned community roundtable discussions on police-community relations, the previous meetings having been held in Atlanta, Cleveland, Memphis, Chicago, and Philadelphia. The roundtable meetings are part of Holder’s National Initiative for Building Community Trust and Justice. The Oakland meeting included both public officials such as the mayor (Libby Schaaf) and police chief (Sean Whent) of Oakland as well as activists who have been in the forefront of protests, including Alicia Garza of Black Lives Matter, Olis Simmons of Youth UpRising, Junious Williams of the Urban Strategies Council, and representatives of other activist groups, including the East Oakland Youth Development Center.

Much of the press discussion about Holder’s meetings has focused on issues of policing, with Holder’s repeated calls for police body cameras, but the roundtables have addressed much more than that. Regina Jackson, president of East Oakland Youth Development Center, for example, raised the issue of how police deal with people who are mentally ill. “I don’t know if folks in public safety have any strategy to deal with people with mental illness,” Jackson said. “People are already victimized by mental illness, and most of the time it’s the illness and not willful disregard. That is something I’m really interested in having them take a look at.”

The Department of Justice launched the National Initiative this past September with a three-year $4.75 million grant, administered by the John Jay College of Criminal Justice on behalf of the National Network for Safe Communities, addressing, in the words of John Jay College President Jeremy Travis, “the broken relationships between the police and communities of color across the nation.” Although Holder has completed his six community roundtables, the advisory board for the Initiative is apparently just being formed. An article from the New Haven Register announced that New Haven police chief Dean Esserman has just been named to the advisory board, which will have its first meeting this month. It isn’t clear from the newspaper reports whether the Initiative meeting held last month in Columbus, Ohio, described as “its first large-scale, daylong program” might have also involved members of the advisory board.

The director of the Initiative, John Jay professor David Kennedy, sees the Initiative as potentially “transformative” as it collects and interprets “existing wisdom and interventions in procedural justice, implicit bias, and reconciliation.” But two residents of the public housing project across from the Willie Mays Boys & Girls Club pointed out the complexity in the task that Holder has given to Kennedy and the Initiative’s advisory board. Lilla Pittman said that in her view, when the police show up, they appear to be “looking to find problems rather than trying to solve them,” as recounted by the Examiner’s Jonah Owen Lamb. Pittman’s neighbor, Shana Davis, indicated that addressing unmet needs could help deter problems of crime. There are clearly issues that need to be addressed in police training and policies, but there are more fundamental societal issues like overt and implicit racism and economic and other disparities that have to be addressed as well.—Rick Cohen