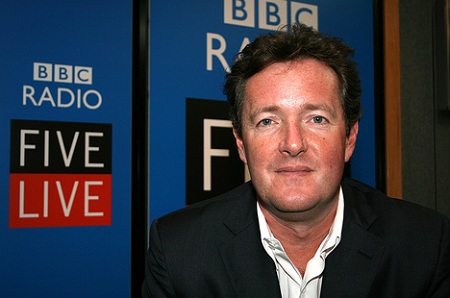 A core tenet of the nonprofit sector is initiative: the willingness of people to stand up and advocate for unpopular positions. Some positions are simply obnoxious, wouldn’t you say? As NPQ has noted in regards to efforts aimed at gun control and secession from the U.S., the White House has a website on which citizens can start petitions on any number of topics. Petitions that get 25,000 or more signatures of support generate a response from the White House.

Recently, radio talk show host Alex Jones initiated a petition to deport CNN host Piers Morgan because of his advocacy of gun control. His petition garnered 100,000 signatures, which will trigger a White House response of some sort. Piers Morgan responded by inviting Alex Jones onto his show. You must see the footage of Jones screaming at Morgan, split into two segments below:

The fact that Jones possesses guns is a walking, talking, live-action advertisement for gun control. Jones bellowed, talked over and through Morgan, and mocked him at times with a fake British accent. Jones described Morgan as a “redcoat” (and pictured him in British revolutionary war garb on his website) and noted, at the top of his lungs, “Hitler took the guns, Stalin took the guns, Mao took the guns, Fidel Castro took the guns, Hugo Chavez took the guns, and I’m here to tell you, 1776 will commence again if you try to take our firearms.”

Questioned about America’s high rate of gun deaths, Jones blamed everything from “suicide pills” to the “New World Order.” Over the course of the interview, he blamed rogue elements of the U.S. military-industrial complex for having carried out World Trade Center attacks and he challenged Morgan to a boxing match, saying, “You think you’re a tough guy? Have me back with a boxing ring and I’ll wear red, white, and blue, and you’ll wear your Jolly Roger.”

A syndicated radio host on more than 100 AM and FM stations, Jones clearly has a rabid right wing following. He has spoken out on issues of charity and philanthropy in the past. For example, his infowars.com website includes articles charging that the billionaires’ Giving Pledge effort associated with Warren Buffett and Bill Gates will have all of the funding “diverted to Eugenics at the hands of the Gates Foundation, and with advice from the Rockefeller clan– depopulation programs, vaccines, 3rd World family planning, population databases and sterilization.” The Jones website has another article posted describing the Gates Foundation strategy as aimed at establishing a “global food monopoly” and “reduc(ing) the world’s population by a significant amount in the process…through vaccines and GMOs” (genetically modified organisms).

Despite the popularity of Jones’s radio show and websites, it is doubtful that Piers Morgan has anything to fear regarding being deported for raising questions about gun violence, such as his comparing about 35 annual gun deaths in the U.K. to approximately 11,000 in the U.S. How Morgan kept his cool as Jones ranted and frothed about assorted conspiracies is hard to imagine. However, the fact that 100,000 people endorsed the Jones petition (and more than ten thousand signed other petitions to deport Morgan) indicates how rabid the Second Amendment crowd is. The nonprofit arm of Second Amendment advocacy—the National Rifle Association—is large, powerful, and wealthy. Nonprofits with a different view of the need for military-style weapons in people’s homes have to gear up to make sure that ranting and frothing doesn’t win the day.—Rick Cohen