All You Need Is Love: A Recipe for Reviving Conservatism? 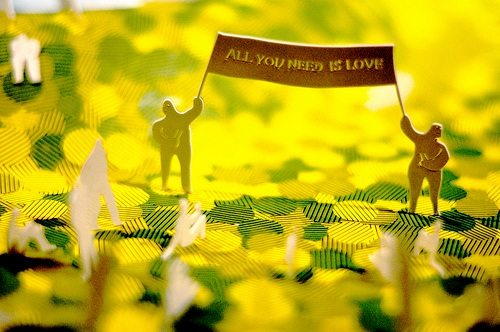 Alongside Bill Schambra at the Hudson Institute, our other favorite writer from the conservative side of philanthropy, willing to take on all of us charitable southpaws, is Scott Walter, an executive vice president of the Capital Research Center and a regular columnist for the Philanthropy Daily. A vigorous critic of what he calls the “Leviathan nation-state,” Walter, like Schambra, is something of a philanthropic populist, challenging the top-down management-control kind of grantmaking pursued by many larger philanthropic institutions on the left and right.

In this article, Walter comments on Michael Strain’s article in The Atlantic, suggesting that conservatism might be considerably boosted by focusing on building and strengthening community. Strain is a labor economist at the American Enterprise Institute, (AEI) but the theme of his article—“all you need is love”—doesn’t cleanly fit into an economist’s input-output matrix. Part of his argument is implicitly that the combination of conservatives’ emphasis on the individual and their use of the nation-state to pursue grand policy objectives has led to their giving unnecessarily short shrift to building the “mediating institutions of civil society”—families, churches, charities, etc.

Walter notes that Strain’s emphasis on mediating institutions in building community has long been a concern of AEI, citing former AEI scholars such as Robert Nisbet, Michael Novak, and Robert Woodson, in addition to himself and Schambra, who both had stints at AEI pushing this theme. But is Strain pushing against the current in conservative thinking? Schambra and Walter both watched Woodson implore other conservative luminaries at the Bradley Awards seminar as to what they would do for “the least of God’s children,” which was obviously a question about conservative concern for community, but the other panelists struggled to answer.

Woodson charged the others in the program, and conservatism in general, with viewing people in need as aliens. Walter cites the results of surveys of voters during the 2012 election, who viewed Mitt Romney as distant and uncaring. That might have been underscored by Romney’s dismissal of the large number of Americans who take advantage of government entitlement programs in order to survive.

What Strain’s argument sounds like to us is a little of George Bush’s program of “compassionate conservatism.” Woodson’s questions and Strain’s call for love and community encapsulate the quality of “mutuality” in community, the bond of compassion that brings Americans together around mutual aid. Too much of our society shows little sense of community. The far right tends to sound uncaring, and even hostile and punitive toward people in need, while the left relies overmuch on large institutions that care about people at a distance, and sometimes as abstractions. For philanthropy to build community, grantmaking should be reaching nonprofits that are authentically connected to the communities they serve, conveying the values of democracy and voice that the “least of God’s children” typically don’t have in large scaled-up nonprofits, large bureaucracies, and big business. In terms that we would connect to the Brazilian educator Paulo Freire, foundations focused on strengthening the mediating structures that themselves strengthen community would rethink and restructure their approaches to support nonprofits in which the people to be served are treated as the subjects or “mutual subjects,” rather than the objects, of grantmaking.

Unfortunately, regardless of the merits or lack of merits of policy prescriptions of many conservatives, the vitriol of some conservative leaders on contemporary policy issues like immigration reform, food stamps, healthcare, and poverty does not fit well in a framework of love, community, and mediating institutions. Strain and Walter have their work cut out for them if they hope to reinsert a sense of compassion in conservative politics.—Rick Cohen