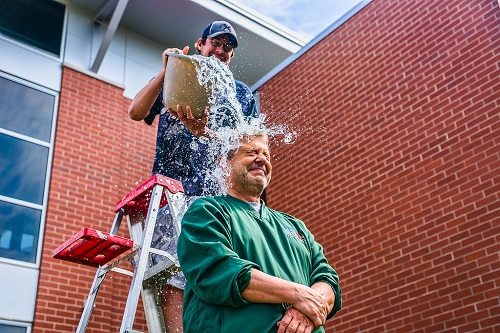 The Amyotrophic Lateral Sclerosis Association (ALSA) quite serendipitously made nearly $100 million in donations associated with the freakishly popular “ice bucket challenge,” and in a move that tempted the fates, it immediately filed an application with the U.S. Patent and Trademark Office, seeking to trademark the term—an ugly, ungrateful move, particularly since the group did not invent the term or fundraising form.

Late yesterday, ALSA said that the idea to trademark was intended to stop any misuse of the term by “unscrupulous profiteers,” not to restrain other charities from using the term:

“The ALS Association took steps to trademark the Ice Bucket Challenge after seeing many examples of unscrupulous profiteers trying to drive revenue to themselves, instead of the fight against ALS. We secured the blessing of the families who initiated the challenge, which they provided without hesitation. The Association did this as a good faith effort to protect the integrity of the Ice Bucket Challenge. We are intent on preventing for-profit companies from capitalizing on this amazing, almost wholly grass-roots, and charitable campaign to raise money and awareness for the fight against ALS.”

But apparently, the public’s reception of the move was not supportive in the least, with the move being called “disgusting,” “shameful,” and “in poor taste,” leading the group to withdraw its application, writing on Facebook:

This is an interesting example of an organization placing itself unnecessarily in the eye of a cultural storm. Ideas around property rights are very charged due to the digital environment, and commentators and the public are sensitive to ideas about who “owns” things. In this case, the public created a campaign at a scale much larger than could have been pulled off by this organization. The public knows that, and for the group then to try to imprison the concept—which was pretty much in the public domain, anyway—through trademarking looks ungracious. On the other hand, unlike other such situations we have noted, ALSA was smart enough to withdraw its filing, and this “Oops. Sorry!” moment is a teachable moment for all boards.—Ruth McCambridge