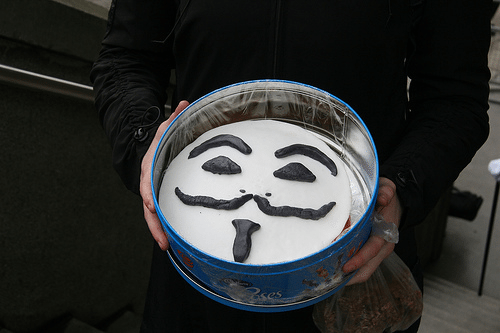 After someone declaring affiliation with the hacktivist collective Anonymous claimed, via Twitter, to have hacked into the Federal Reserve Bank last Sunday while much of America was watching the Super Bowl, there was a moment of silence. But late Tuesday, the Fed confirmed that it was indeed hacked and that the information that the hacker(s) published included the login information, credentials, Internet protocol addresses and contact information of more than 4,000 U.S. bankers.

The information was apparently downloaded from a site to be used by banks on the occasion of a natural disaster and the hacking was apparently part of Anonymous’ “Operation Last Resort” response to the prosecution and suicide of Aaron Swartz. The Fed breach follows two January hackings of the U.S. sentencing commission website, where hackers claiming affiliation with Anonymous added an “Asteroids” game in front of a backdrop of a Guy Fawkes mask, Anonymous’ signature image. Anonymous also hacked into the Massachusetts Institute of Technology website last month to denounce the charges against Swartz and reiterate his call for computer crime law reform and open access to information initiatives.