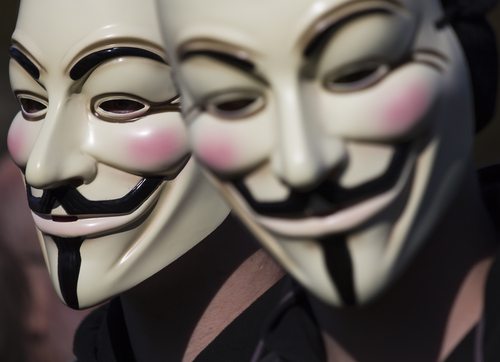 The loosely knit hackers’ collective known as Anonymous hacked into several Chinese websites last week and has plans to continue attacks on Chinese government websites. The group is using the Twitter account “Anonymous China” to broadcast the attacks, and has posted links to data files containing personal information from the hacked Chinese websites.

The attacks aimed at China are allegedly due to the country’s control over social stability, which includes routine blocking of many popular social media websites not sanctioned by the Chinese government, including Twitter, Facebook, YouTube and many others, as well as occasional blocking of foreign media sites. The cyber attackers covered the hacked sites with revolutionary messages, condemning what they referred to as Beijing’s “evil regime” and forewarning, “Your government has been in control of your network and filters harmful things. Careful.”

CNN reports that the attacks came less than a week after China had suspended comments on Sina’s Weibo and Tencent’s QQ, two of the country’s largest micro-blogging websites. Authorities also detained six people and shutdown sixteen websites for allegedly spreading rumors of “military vehicles entering Beijing and something wrong going on in Beijing.” A list of about 500 Chinese sites that claimed to have been hacked was posted on pastebin.

The hacker, referred to as F0ws3r, said the group planned more serious attacks against Chinese websites and told Reuters, “First we want to alert the Chinese government that we aren’t afraid, and we are going to show the truth and fight for justice.” The hacker also added that the plan was to take down the “great firewall of China.” Do you think Anonymous has the capacity to render China’s authoritative approach to online content ineffective? –Aine Creedon