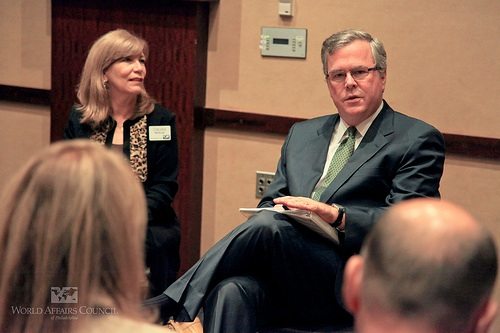 Foundation e-mail communications are proving very interesting for those trying to better understand how private philanthropy interacts with public school systems. The NPQ Newswire commented on the e-mail exchanges between representatives of Facebook’s Mark Zuckerberg and Newark Mayor Cory Booker during the planning stages of the Facebook billionaire’s $100 million donation to the Newark, N.J. school system. Now a group called In the Public Interest has done the same favor for the Foundation for Excellence in Education (FEE), founded by former Florida governor and potential presidential candidate Jeb Bush.

The e-mails number in the thousands, but In the Public Interest seems to focus strongly on those pointing to privatization trends. The key information revealed in these e-mails involves the foundation’s work in connecting the members of a Bush-created council of current and former state education commissions with corporations interested in privatizing state education functions. According to Donald Cohen, head of In the Public Interest, corporations have been using Jeb Bush’s foundation “to help state officials pass laws and regulations that make it easier to expand charter schools, require students to take online education courses, and do other things that could result in business and profits for them.”

The e-mails describe FEE activities such as helping to write legislation in Florida that would lead to more use of a proprietary test, the Florida Comprehensive Assessment Test (FCAT), marketed by Pearson, which is a FEE donor. E-mails also describe FEE pitching SendHub, a communications tool, for use in Florida schools and Rhode Island schools. Jeb Bush is an investor in SendHub. The e-mails also showcase FEE pushing for Florida to adopt a “parent trigger” law, which could benefit for-profit FEE allies such as Charter Schools USA, a school management firm. In addition, the e-mails point to discussion about a Maine push for a cyber-schooling executive order from the state’s Republican governor, designed by Digital Learning Council, which is co-chaired by Jeb Bush and funded by for-profit firms K12, Pearson, and McGraw-Hill.

In addition to corporate funders such as Microsoft, Intel, Pearson, K12, Target, State Farm, and McGraw-Hill, the e-mails reveal a number of private foundations supporting FEE or FEE events. Many of the funders are those on the hard right that one would expect to be supporting school choice issues and privatization or corporatization strategies, such as the Lynde and Harry Bradley Foundation and the Hume Foundation. However, others were much more in the line of “mainstream” or liberal funders.

The economy may have been tough in the past few years, but not for Jeb Bush’s FEE, whose revenues and fund balances, as reported on its Form 990 filings, have increased consistently and dramatically:

Education is a big thing with the Bush clan. President George W. Bush’s most significant domestic policy achievement is undoubtedly the No Child Left Behind program that in many ways ushered in the high-stakes testing regimens that bedevil so many school systems. Brother Neil Bush had a firm, Ignite, which marketed educational software to public school systems; interestingly, the Neil Bush firm sought to sell its software to Florida to help students prepare for the FCAT exam that e-mails show FEE helped to write legislation for.

But No Child Left Behind has been slammed by people on both sides of the political spectrum and Neil Bush’s business dealings left a lot to be desired. The foundation established by Jeb Bush is making its mark on the privatization of public education. It remains to be seen whether the founder may pursue his education agenda via pursuit of the Oval Office someday.—Rick Cohen