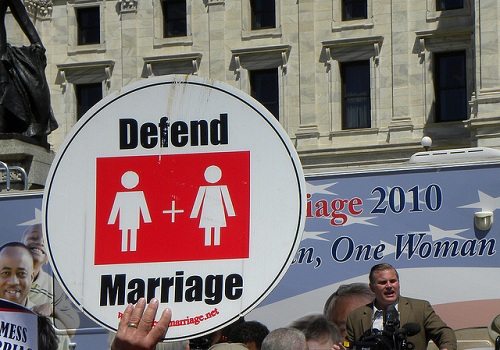 The IRS flap has definitely opened a can of worms. Monday, the National Organization for Marriage reissued its call for a congressional hearing into the possibility that the IRS leaked the names of their donors to the press. “This is what happens in the Soviet Union,” NOM President Brian Brown said. “This is not what happens in the United States of America.”

Back in April 2012, the Huffington Post revealed that Mitt Romney donated $10,000 to NOM in 2008. NOM then called for an investigation by the Treasury Inspector General for Tax Administration on whether IRS employees had leaked the information.

ProPublica has also revealed that the IRS office that targeted conservative groups released nine pending applications from those groups to ProPublica late last year, although they were supposed to be confidential. The pending applications were bundled into a group of 31, most of which were approved and therefore no longer confidential. ProPublica, however, was not contacted by the inspector general’s office in its investigation.

One of the as-yet-unapproved applications was for Crossroads GPS, a group that spent $70 million from anonymous donors on the 2012 election, even after declaring on its application that “any such activity will be limited in amount, and will not constitute the organization’s primary purpose.”

When ProPublica tried to find out why they had received the unapproved applications, IRS spokespeople wrote back, “It has come to our attention that you are in receipt of application materials of organizations that have not been recognized by the IRS as tax-exempt,”

Last December, Crossroads spokesman Jonathan Collegio wrote to ProPublica, “As far as we know, the Crossroads application is still pending, in which case it seems that either you obtained whatever document you have illegally, or that it has been approved.” ProPublica reports that the office that responds to requests for nonprofits’ applications seems to have changed.—Ruth McCambridge