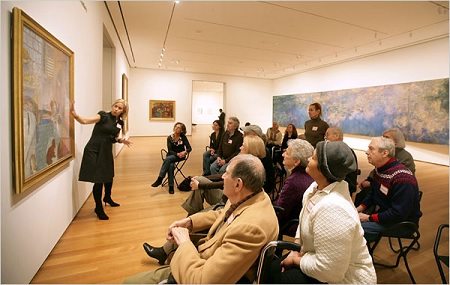 Art museums and galleries are increasingly working with local chapters of the national Alzheimer’s Association and similar organizations to develop programs that target people with mild cognitive impairment (MCI) and early stages of dementia. An article in the Atlanta Journal-Constitution cites four programs in Georgia—two in Atlanta, one in Augusta, and one in Cartersville—which represent a trend inspired by the pioneering “Meet Me” program at the Museum of Modern Art (MoMa) in New York. That program, funded by the MetLife Foundation from 2007-2014, yielded useful insights and best practices that other museums can learn from.

It’s long been recognized that visual art and music can help those with MCI to respond in ways that other experiences may not—evoking memories, stimulating the senses, sometimes even triggering conversations for people who find self-expression increasingly difficult. As explained in a Central California Chapter of the Alzheimer’s Association publication:

“The same disease process that makes it difficult for the brain to organize information also releases its creativity. People with mild cognitive impairment (MCI) and dementia are highly creative, often capable of deeply intuitive and inspiring interpretations of their surroundings. They also experience an enhanced, sometimes uncanny, ability for visual observation, capturing a multitude of details commonly missed by most ‘sound’ brains. Participation in activities involving art further stimulates the already enhanced creativity and observation skills, promoting the formation of healthy neuropathways connecting memories, visual-spatial and language abilities.”

Put another way, “Art has a way of bringing you back,” says Julie Green, senior manager of school programs at Emory University’s Michael C. Carlos Museum, which offers “Museum Moments” for people with early memory loss and their caregivers. The program includes a free tour with a specially trained docent. The pace is slow and the scope limited to avoid overwhelming the participants and to allow them time to respond to individual works of art.

The programs mentioned in Georgia all seem to be yielding positive benefits for both the dementia patients and their caregivers. Suzette Binford, programs director of the Atlanta Regional Office for the Alzheimer’s Association, Georgia chapter, notes: “It’s something they can do with their loved one that’s not based on the impairment. They’re on a level playing field.”

Although MoMa’s Meet Me program, which was part of the MoMA Alzheimer’s Project, has ended, the museum continues its efforts to provide rich learning experiences for people with memory loss. Perhaps even more importantly, the lessons learned through Meet Me are now being used by art museums around the world to develop similar programs, and MoMA staff continue to consult with and train others interested in starting outreach programs for people with Alzheimer’s or dementia. For more information, watch this brief video or download this guide for museums.—Eileen Cunniffe