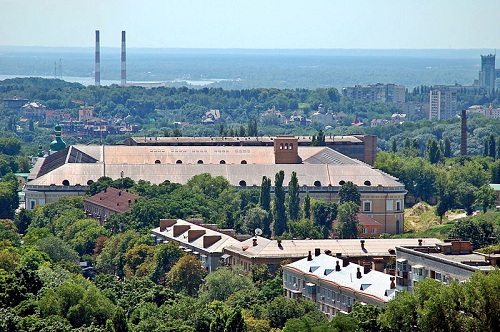 NPQ has written on a number of occasions about protests in Russia about the closeness of the church and state. In particular, we have followed the case of the women in Pussy Riot. So this story may be viewed in that context.

Contemporary artist Volodymyr Kuznetsov arrived at the Mystetskyi Arsenal, a museum in Kiev, on July 25 to finish his commissioned mural, “Koliivschina: Judgment Day,” only to find that it had been painted over. (Reportedly, the piece showed corrupt clergymen and bureaucrats burning in hell.) The general director of the museum, Natalia Zabolotna, confessed that she had covered the mural she had herself commissioned from Kuznetsov with black paint. “You can call this my own performance,” she said. “I don’t regret what I did.” She added that she was “speaking out against the impudence of certain artists.”

The deputy director of the museum, Oleksandr Solovyov, promptly resigned in protest, as did Kateryna Stukalova, editor in chief of the journal “Art Ukraine,” which was started by Zabolotna.

The exhibition of which the mural was to be a part was connected to celebrations of the 1,025th anniversary of the events that brought Christianity to Ukraine and Russia. Among those attending the opening on July 26th in Kiev were President Vladimir Putin of Russia, the Russian Orthodox Patriarch, Kirill I, and the Ukrainian president, Viktor Yanukovych.

“The painting, a mural measuring 11 meters by 5 meters, showed a flaming nuclear reactor with priests and judges semisubmerged in a vat of red liquid. A car that appeared to be carrying officials was shown plunging into the vat—likely a reference to the numerous traffic accidents caused by officials in the country. A hodgepodge of other figures were grouped alongside, including what appeared to be the image of Iryna Krashkova, the woman who accused two police officers and a civilian of beating and raping her last month. Her case has prompted a wave of protests.”

In a blog post on the Ukranian News site Left Bank, Kuznetzov described Zabolotna’s painting over the mural as “an act of vandalism and bureaucratic groveling.” An appeal by the Art Workers’ Self-Defense Initiative on the same site called for a boycott of Mystetskyi Arsenal. It charged that general director, Natalia Zabolotna, had used the “Great and Grand” exhibition as a vehicle for “presenting culture as an attractive object working for the fusion of state and church, which in this instance is encroaching even on artistic space.”

NPQ is always in awe of the power of art to mobilize, but the power of the suppression of art is even sometimes more powerful.—Ruth McCambridge